In the first two weeks after Russia’s unprovoked invasion of Ukraine, China sought to strike a balance with both sides in its political statements. Russia’s actions were not officially condemned, yet Ukraine’s sovereign rights to self-determination and territorial integrity were seen as givens. It now appears China’s tightly controlled state media is tilting clearly in Russia’s favour. While China has offered to act as an intermediary between Ukraine and Russia in peace talks, the matter has not moved any further.

Sanctions imposed on Russian banks and the exclusion of seven Russian banks from the international SWIFT financial messaging system also impact the operations of Chinese banks, who face the threat that the United States will impose secondary sanctions to foreign banks that violate the sanctions regime and thereby lose access to US financial markets and dollars. While most Chinese banks have been reluctant to comment on the situation, ICBC, China’s largest bank, announced that it was immediately ending the granting of dollar-based letters of credit for Russian trade. Letters of credit are used widely in Russia and China’s bilateral commodities trading. In addition, Bank of China announced it was suspending some funding to Russia related to trade. A part of US sanctions on Russian banks do not enter into force until March 26.

The complication of payment traffic between Chinese and Russian banks reflects directly on companies engaged in bilateral trade. Several Chinese firms have noted difficulties in commodity trading, referring directly to the suspension of dollar-based letters of credit. According to the Financial Times, sanctions and the ruble’s collapse have cut Chinese exports of smartphones to Russia by at least half. On Thursday (Mar. 10), Russian officials claimed that, due to sanctions, China is refusing to sell them aircraft parts. Moreover, many international shipping companies have ceased ship to and from Russia, and some European ports such as Hamburg now refuse to handle any containers destined for or coming from Russia. Such measures significantly hamper Russia-China trade. In trade policy, China announced a lifting of all bans on Russian wheat imports on the very day of the Ukraine invasion (Feb. 24).

Following the World Bank’s announcement, the China-driven Asian Infrastructure Investment Bank (AIIB) last week said it was halting operations involving Russia or Belarus. AIIB granted a total of $800 million in loans to Russia during 2019 and 2020. The loan applications currently under consideration are worth about $300 million. Two loans to Belarus for a total of roughly 200 million euros are also under consideration. The New Development Bank (formerly the BRICS Development Bank) announced it has suspended all new lending to Russia.

In recent weeks, Chinese financial markets have been reacting both to current world events and a worsening domestic covid situation. The drop in share prices last week has continued this week. Since the February 24 invasion, the Shanghai exchange is down by 7 %, Shenzhen by 9 % and Hong Kong by 12 %. The yuan’s exchange rate has remained stable against the US dollar. While Bloomberg says that foreign investors sold off more Chinese bonds in February than ever, it is unclear how much of the sell-off occurred after Russia attacked Ukraine.

Commodity prices in China have risen in line with climbing world market prices. China’s current pricing mechanism translates increases in global crude oil prices to higher prices at the gasoline pump, and as a result, China is experiencing record-high fuel prices as in many countries. China’s pricing mechanism, however, freezes domestic fuel prices when the price of crude oil on global markets hits $130 a barrel. On Wednesday (Mar. 9), the National Development and Reform Commission (NDRC) called on the country’s large state-owned oil refiners to halt exporting fuels in April to prevent fuel shortages at home. 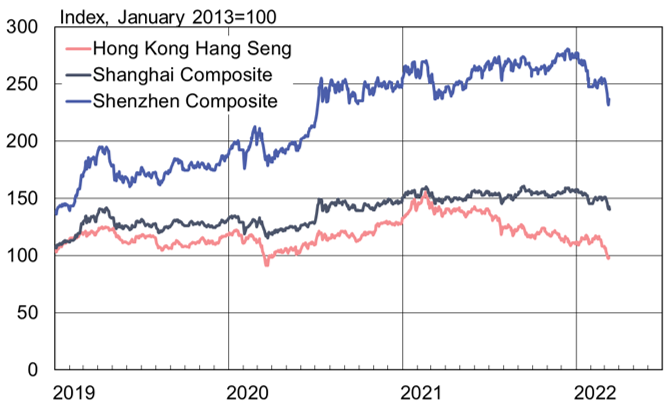