Despite facing a deep recession, Russia’s leaders have so far not moved very strongly on government sector spending stimulus. Government sources note that this year’s increase in federal budget spending is now scheduled at 0.8 % of 2021 GDP. While there are small additional spending allocations to different sectors of the economy as well as limited tax breaks, the emphasis in the spending increases is on unemployment benefits and development of railways.

In addition, president Putin promised increases in social supports for families with children, which would require the equivalent of 0.3 % of GDP. Under the Russian constitution, pensions must rise at least as fast as inflation. The rise in consumer prices, which is expected to accelerate this year to at least 20 %, implies that the increase in pensions will require increased budget outlays equalling at least 1.5 % of GDP. At the same time, the acceleration in inflation this year has led to a situation where even with these hikes government budget spending will decline in real terms.

Russia can afford further increases in spending over the short term. Despite the recession, the rise of budget revenues this year looks likely to considerably outstrip inflation. This is because export tariffs and production taxes on the oil & gas sector are measured in dollar terms. Such revenues last year constituted 20 % of total government budget revenues. They already soared this year in rubles largely on the ruble’s sharp fall. Markets also expect prices of oil & gas to be higher this year than last year. A significantly smaller downward impact on oil & gas revenues will arise from the EU countries’ freshly adopted policies aimed at reducing energy imports from Russia as well as decisions of certain other countries and some firms to end Russian oil imports. Tax revenues from oil & gas will fall next year if the market expectations of lower oil & gas prices come to pass and the ruble’s exchange rate sinks no more (mainly due to the requirement that Russian firms convert 80 % of their export currency earnings to rubles). Other budget revenues will be drawn down this year by the contraction of GDP. While high inflation makes the nominal figures look better, these revenues will decline in real terms.

The government decided to invest assets equivalent to 0.8 % of GDP from the National Welfare Fund (NWF) in order to support share prices of traded companies. The combination of NWF liquid assets and last year’s oil & gas tax revenues wating to be transferred to the fund stand at nearly 15 % of GDP after the sharp drop in the ruble’s exchange rate. However, these assets are in foreign currencies and part of the country’s forex reserves managed by the central bank. Sanctions imposed by EU countries and the US include bans on dealing with Russia’s central bank, which means that the use of the NWF is also effectively stopped. 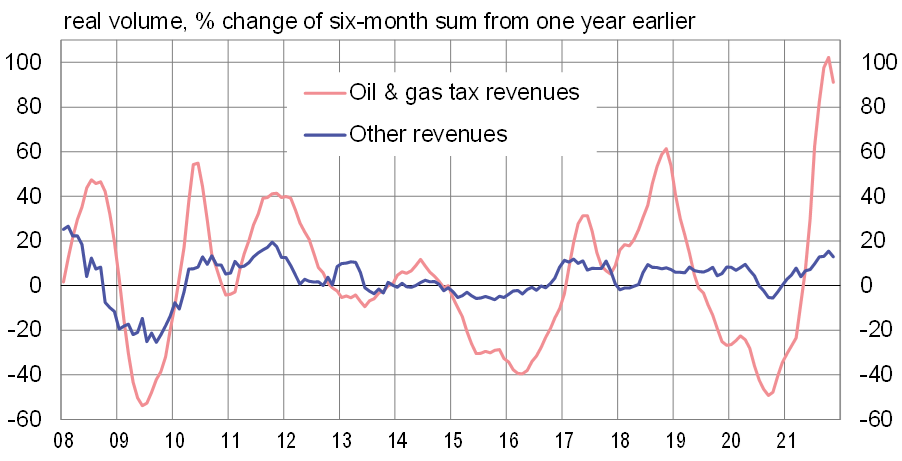