On the same day that the National Bureau of Statistics released its December economic figures (Jan. 17), the People’s Bank of China lowered its key reference rates. Both the reverse repo rate used in open market operations and rates of the medium-term lending facility (MLF) programme were cut by 10 basis points. The PBoC said it was going to use its monetary toolbox more widely this year in order to avoid a collapse in lending, as well as to support economic growth and stability. The growth in the bank loan stock slowed throughout 2021.

Although bank reserve requirements were lowered already in December (BOFIT Weekly 50/2021), the rate cuts were the first since spring 2020 when the covid crisis hit China. The 1-week reverse repo rate fell to 2.1 % and 2-week rate to 2.25 %. The central bank’s MLF programme provides credit to commercial banks against collateral. The one-year MLF rate was lowered to 2.85 %. New MLF lending in January amounted to 700 billion yuan, which exceeded the 500 billion yuan in maturing MLF loans. The central bank typically boosts liquidity ahead of the Chinese Lunar New Year in anticipation of increased money demand. This year, the week-long holiday begins on January 31.

The reference loan prime rate (LPR) was also lowered. The one-year LPR was cut by five basis points already in December and another 10 basis points in January to its current level of 3.7 %. The 5-year LPR, which is the reference rate for housing loans, was lowered in January by five basis points to 4.6 %. The relatively small reduction is seen as a signal that the government wants to support the market for housing loans, but is unwilling to provide broader stimulus to the heavily-indebted real estate sector. The drop in monetary policy rates is also reflected in bond rates. In these last days of January, the one-year government bond rate stands at 2 % and the rate for corporate bonds with AAA ratings are averaging 2.5 %. 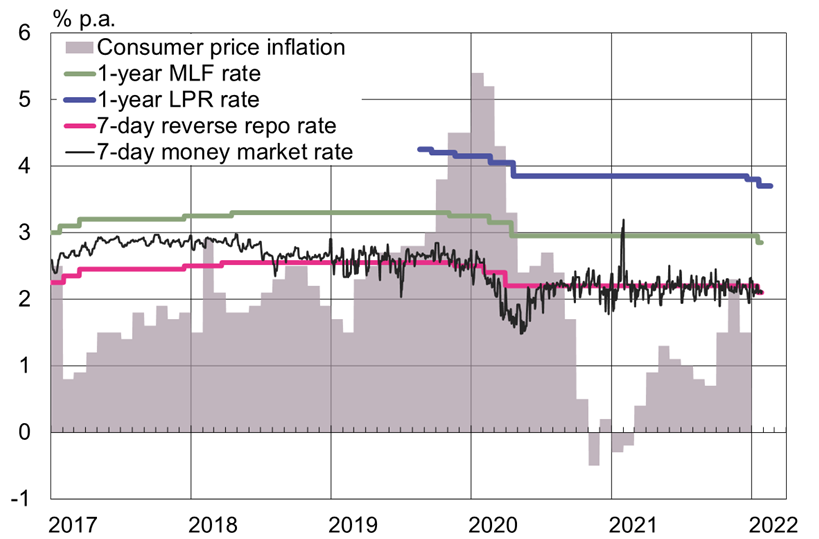