China’s National Bureau of Statistics (NBS) last week released its economic figures for the fourth quarter of 2021. According to official estimates, 4Q GDP increased by 4 % y-o-y and as much as 1.6 % q-o-q. Given the low basis reference of 2020, the 8.1 % growth for all of 2021 was well in excess of the government’s “over 6 percent” annual GDP growth target.

China’s official growth figures have long aroused scepticism, and indeed, the 4Q21 figures do not quite match up with other reported growth indicators. For example, the Bank of Finland’s alternative GDP growth estimate suggests that China fourth-quarter growth was considerably lower. Similar findings have been presented by other institutional forecasters such as the London-based Capital Economics research consultancy. Still during the first half of 2021, the pace of economic growth in alternative forecasts closely tracked China’s officially announced growth figures.

The 4Q numbers from NBS indicate recovering domestic consumer demand and strong exports. They also show that fixed investment demand contracted and restrained GDP growth – an exceptional reversal for China. From the supply-side perspective, growth was led by industrial production. Retail and wholesale experienced only slight growth, and were even beaten out by agricultural output. Growth in the hotel and restaurant field was slack, while activity in the construction and real estate sector contracted. 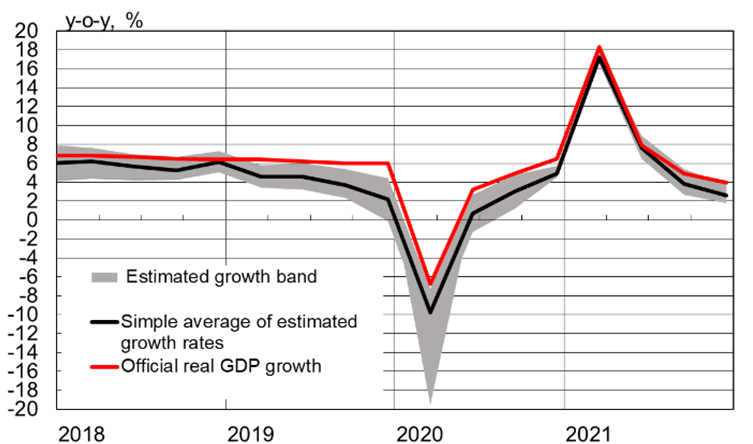