The declining market trend, which began at the end of October, has become steeper in recent weeks. The dollar-denominated RTS stock index has fallen by about 10 % since the start of this year and about 25 % from its all-time high last October. The ruble has also lost a bit of ground against both the dollar and euro since the start of this year, despite a rise of nearly 20 % in the price of Urals-grade crude oil to levels not seen in years. In addition, the price of Russian credit default swaps (CDSs), derivatives based on Russian state treasuries, has increased sharply in recent weeks.

Western sanctions have restricted Russian access to international funding. For example, Russia’s dollar-denominated foreign debt has been halved since the end of 2013. Russia has also sought to reduce its exposure to possible new rounds of US sanctions by reducing its dollar dependence. In November 2021, Russia held just $2 billion in US treasury bills, down from over $100 billion in 2017. The US dollar’s share of Russia’s foreign currency reserves has fallen from 45 % in 2013 to 16 %. The share of exports priced in dollars has fallen from 80 % to under 60 %. 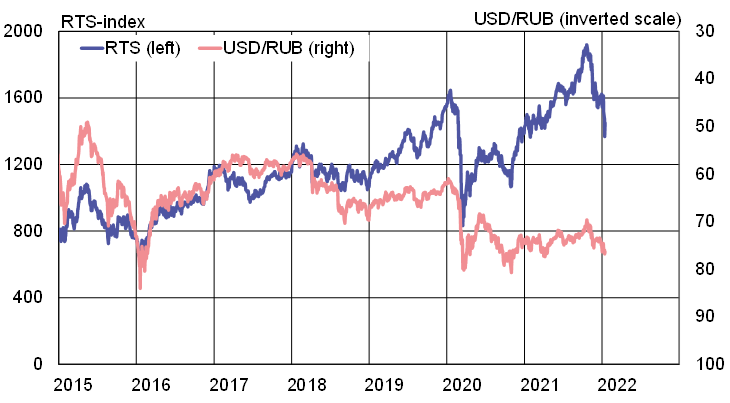