Retail sales grew in real terms by 1.9 % y-o-y in October. China’s rigorous efforts to suppress the spread of covid-19 hurt consumer demand. Car sales, which accounted for 8 % of all retail sales, declined by 12 % y-o-y in October. When car sales are excluded, October retail sales would have been almost two percentage points higher. In the first half of this year, on-year growth in retail sales was high mainly due to the low reference basis of last year. In August-October period, however, real growth averaged less than 2 % y-o-y.

On-year growth in industrial output slowed sharply in September to around 3 % before recovering slightly to 3.5 % in October. Electricity shortages and blackouts (BOFIT Weekly 40/2021) appear to have eased over the past weeks as China’s National Development and Reform Commission (NDRC) launched a range of measures to quell the rise in coal prices and increase coal production and electricity supply. A cold winter could again exacerbate coal shortages. This week, an NDRC representative offered assurances that coal supplies would be sufficient to make it to spring, but warned that natural gas shortages could still lie ahead. Continued robust export growth is supporting manufacturing output (in dollar terms, the value of exports increased by 27 % y-o-y in October and 32 % y-o-y for the January-October period).

The contraction in construction activity continued in October as the financing problems facing developers have intensified. The volume of new construction starts fell sharply. Measured in terms of floorspace, the volume of real estate sales in October declined by 22 % y-o-y. The two-year annualised sales volume fell by 5 %. In addition, the value of sales contracted by 2 % in two-year annualised basis. The National Bureau of Statistics reports that apartment prices in large cities have declined somewhat since summer. Even so, they were slightly higher on average than in October 2020.

Measured in terms of floorspace, building sales, starts and buildings under construction are all decreasing 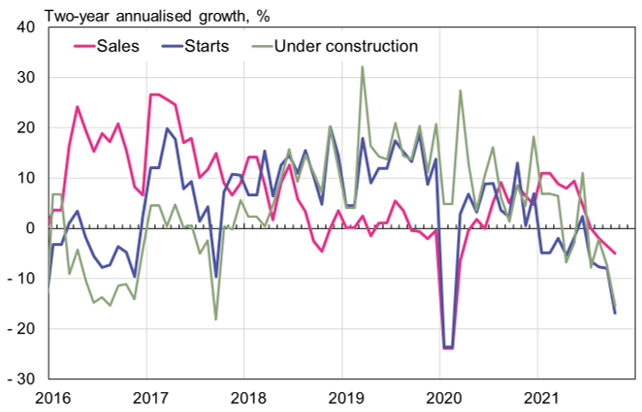