China released its climate policy framework in October. The “1+N” reference framework sets forth a path to the dual goals of a peak in carbon emissions by 2030 and carbon neutrality by 2060. The “1” in the reference framework stands for the “overall deployment” needed for hitting carbon targets. The “N” represents numerous “policy action plans and measures” in core industrial branches and sectors.

Overall deployment specifies goals and measures for both the current year and next five years, which are in line with the general five-year plan approved in spring 2021. Goals include reducing energy intensity, lowering greenhouse gas emissions and reforestation. The shift to green energy will be encouraged through changes in tax and price policies. The current five-plan requires the setting of an initial framework for a green, low-carbon and circular economy by 2025 and greatly improve country’s energy-efficiency. Public-private partnerships are emphasised in these measures, as well as international coordination (see Working Guidance document here).

China has also committed publicly to ending financing of coal-fired power plants outside of China. A joint assessment of CREA and the Global Energy Monitor found that two-thirds of planned coal-fired plants in Asia are dependent on Chinese financing. The power generation plans of Bangladesh and Sri Lanka would likely to be most impacted by China’s decision to turn off the financing faucet.

During the Glasgow COP26 climate summit, China’s special climate envoy Xie Zhenhua announced a joint effort by China and the United States to coordinate the two countries’ climate efforts in this decade. Both parties saw reduction of methane emissions as a top priority and agreed on developing a detailed methane plan at their next meeting in the first half of 2022. The US announced its goal of 100 % carbon-pollution-free electricity by 2035 and that China would reduce its coal use gradually in the next five-year plan (2026–2030). The commitments laid out in the US-China Joint Glasgow Declaration have won broad praise. As with China’s domestic climate goals, the actual impacts will depend entirely on later implementation of concrete measures.

US-China cooperation continued on Monday (Nov. 15), when presidents Biden and Xi met virtually for the first time (although the two have talked on the phone earlier). Both the Chinese and American official statements after the meeting implied that the talks were conducted in a constructive way, even if they also included touchy topics for China such as Xinjiang human rights abuses and tensions over Taiwan’s future. The active dialogue represents a welcome change, as the trade war measures and countermeasures remain in full force. In early October, the US expressed its desire to continue trade negotiations (BOFIT Weekly 40/2021). 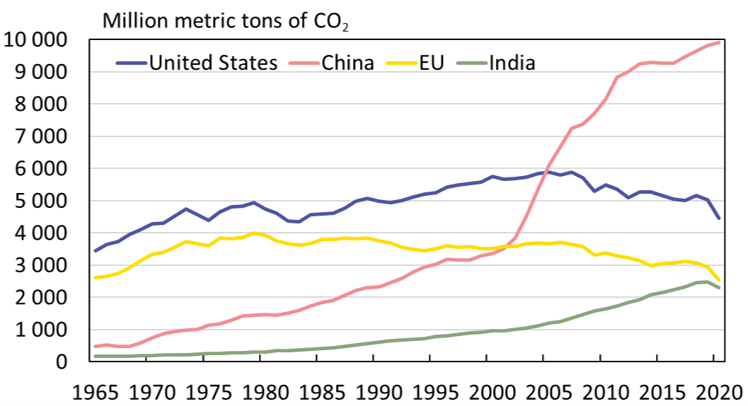