Russia saw the pace of budget revenue growth accelerate further in the third quarter, i.e. a more than 40 % y-o-y nominal rise in revenues to the consolidated budget (covers federal, regional and municipal budgets, as well as state social fund budgets) and a 20 % rise from two years previous. Revenues were also up for January-September by nearly 20 % from two years previous.

The pace of spending growth accelerated in the third quarter. In January-September, the increase was 10 % y-o-y and 27 % from two years previous (an increase of about 14 % in real terms). The budget deficit evaporated similarly to the wakes of the previous two recessions (the wakes of 2010–2011 and 2017–2018). By September this year, the budget even showed a small surplus for the last twelve months.

The ratio of budget revenues to GDP climbed in the third quarter to nearly 37 % for the last four quarters, a level last seen in 2008. The increase has been induced by gradual growth in revenues other than those from oil & gas taxes, a trend that extends back to 2015. Their GDP ratio is now over 30 % of GDP. In contrast, budget revenues from production taxes and export taxes on the oil & gas sectors have declined as a ratio to GDP since 2014, when oil prices last hit a record. Over the past four quarters, the ratio has been slightly over 6 %. The ratio of budget expenditures to GDP has fallen to below 37 % after hitting a record of nearly 40 % last year during the struggles with the pandemic and recession.

Revenues from corporate profit taxes soared in the third quarter, lifting their rise for January-September to nearly 25 % from two years previous. In addition, the Duma is currently considering increases on taxation of certain metals and mineral fertilisers. Under the changes, increased or modified production taxes are to be based mainly on sales prices. This approach to taxation naturally reduces firm profits which in these branches have long been considered excessive by many of Russia’s top authorities during times of high prices.

Spending on social supports in the consolidated budget rose strongly in the third quarter, due partly to one-time payments e.g. to pensioners announced by president Vladimir Putin’s almost on the eve of the Duma election in September. Growth in several other main spending categories slowed. For January-September, spending on various sectors of the economy has increased by over 20 % y-o-y (and by 50 % from two years previous). Spending on social supports has risen by 9 % y-o-y (up over 25 % from two years previous), and education spending has seen a 10 % y-o-y bump (17 % from two years previous). Spending on healthcare, defence and homeland security & law enforcement was largely unchanged in January-September from 2020. Still, healthcare spending in January-September was up by over 30 % from the same period in 2019. 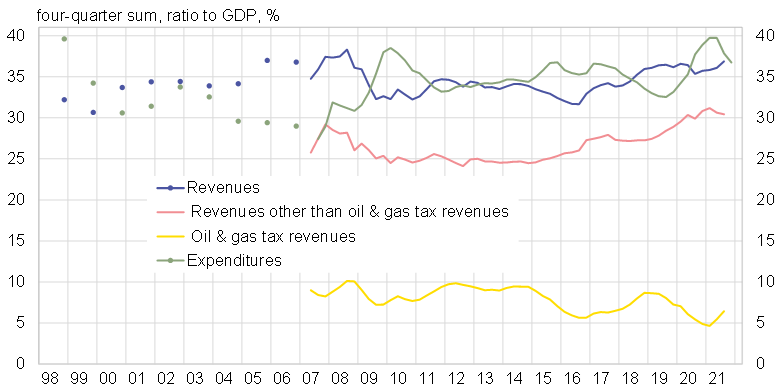