While real GDP was up by 4.9 % y-o-y in the third quarter, the National Bureau of Statistics reports that it grew by just 0.2 % from the second quarter. Some slowdown was expected, but the sluggishness of growth came as a surprise. Thanks to the low basis reference of 2020, GDP grew by a blistering 9.8 % y-o-y in the first nine months of the year, so there is little risk that China fails to meet its “over 6 %” growth target for this year. Next year’s growth legacy, however, is likely to be slim.

The Bank of Finland’s alternative GDP calculations indicate that the 3Q slowdown was sharper than official figures suggest. In the first and second quarters of this year, our alternative calculations line up closely with China’s reported official GDP growth figures.

Barriers to higher growth seem to be piling up entering the fourth quarter. Vacation travel was down even from last year’s numbers in the National Day holiday break at the start of October. Electrical power shortages and outages (BOFIT Weekly 40/2021) seem to continue despite last week’s announcement by the National Development and Reform Commission (NDRC) of changes in electricity rates. Starting last Friday (Oct. 15), some coal-fired power plants have been allowed to increase their electricity rates by 20 % from the official base rate. The rates for some large industrial customers can be increased even more. Property sales in the construction sector and new building starts contracted in September. To date, at least, the government has not launched any significant measures to support the struggling construction sector. 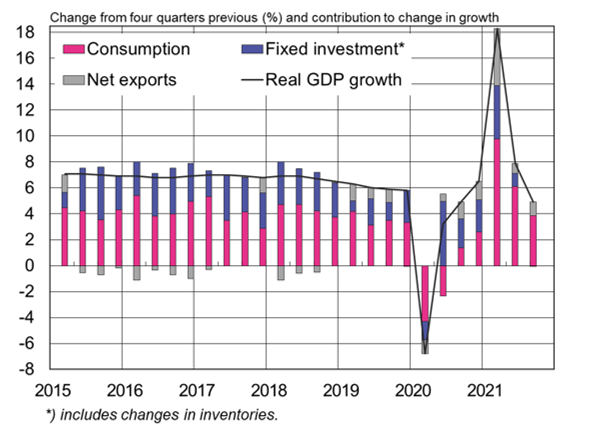