China’s domestic stock of bank loans grew by 11.9 % y-o-y in September. Growth in the stock of bank loans and the People’s Bank of China’s (PBoC) measure “aggregate financing to the real economy” (AFRE) have slowed after last year’s covid stimulus measures. AFRE includes categories for e.g. the shadow banking sector, IPOs and bond financing. September’s 10 % y-o-y growth was the slowest since 2005, when the composition of AFRE was somewhat different from what it is at present. Corporate reliance on bond financing has slowed considerably this year and the shadow banking instruments’ stock continues to shrink. At the end of September, AFRE was equivalent to 275 % of GDP, down from 281 % in September 2020.

In the third quarter, the share of loans granted to households in total new bank lending fell to less than third (the share was about 50 % at the end of 2019). Housing loans make the bulk of household loans. Their growth has slowed with the general slowing in the rise of housing prices, as well as stricter regulation of housing loans and increased uncertainty surrounding the payment troubles of China’s construction companies. In September, growth in the household bank loan stock slowed to 11 % y-o-y (16 % y-o-y at the end of 2019). Growth in the stock of corporate loans remained relatively stable at around 12 %.

Despite the uncertainty from slowing economic growth, electricity shortfalls and the increased payment troubles of construction companies, the PBoC has not relaxed its monetary stance since summer. The reference rate for bank lending (the loan prime rate or LPR) has been unchanged since April 2020. The PBoC has only cautiously increased market liquidity this year through open market operations, lending programmes and changes in the reserve requirement ratio (RRR). PBoC operations generated a net liquidity increase of 280 billion yuan in the first nine months of the year (the increase was 1.53 trillion yuan for the same period in 2019).

The PBoC has long talked about dealing with indebtedness and financial market risks, and the current modest slowing in debt growth offers an opportunity for this. Soaring producer price inflation at the moment is not expected to significantly affect consumer prices. The PBoC points out that the rise in producer prices is temporary and mainly due to high commodity prices. September producer prices rose by 10.7 % y-o-y (9.5 % in August), while consumer prices grew by just 0.7 % (0.8 % in August). In September, however, the central bank provided funds to banks to increase lending to small firms struggling, among other things, with soaring input prices.

Uncertainty with the property sector companies has yet to translate into significant capital flight pressures. Indeed, the yuan has appreciated slightly in recent weeks. On Friday (Oct. 21), the yuan’s nominal effective (trade-weighted) exchange rate was up 3 % from the start of September. The yuan gained 1 % against the dollar. Inflows to China from growth in the current account surplus and the opening up of China’s financial markets have supported the yuan’s exchange rate.

Growth of the credit stock has slowed this year 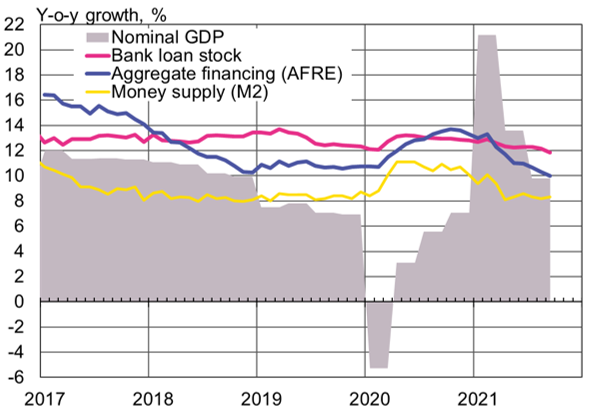