On October 22, the Central Bank of Russia raised its key rate by 75 basis points, surpassing market analyst expectations. The key rate now stands at 7.5 %. The CBR began to tighten its monetary stance in March and has since increased the key rate six times. In its forward guidance, the CBR did not rule out the possibility of further hike at its next meetings.

The acceleration in inflation has been driven by the failure of supply to keep up with the stronger-than-anticipated rebound in domestic demand from the covid-19 crisis in 2020. At the same time, the unemployment rate is record low and growth in bank lending is strong. Surging global commodity prices continue to fuel inflation. Moreover, the inflation expectations of firms and households have risen to record levels. For example, in October household inflation expectations for the next 12 months were 13.6 %, a level not seen in five years.

The CBR also released its October forecast for the Russian economy in the years 2021 to 2024. The GDP growth forecast was unchanged from the previous July forecast, i.e. the CBR still expects annual GDP growth of 4‒4.5 % in 2021 and 2‒3 % p.a. in the following years. Due to the acceleration in inflation and elevated inflationary factors, the central bank now expects 12-month inflation to reach 7.4‒7.9 % (up from 5.7‒6.2 % in the July forecast) by the end of this year. The forecast sees inflation running at 4–4.5 % at the end of 2022 and thereafter remaining close to the CBR’s inflation target of 4 %. The CBR forecasts the average of the key rate to be in the range of 7.3‒8.3 % (6‒7 % earlier) in 2022 and 5.5‒6.5 % (5‒6 %) in 2023. The neutral rate of interest for the Russia economy is currently estimated to be around 5‒6 %, which would mean that, on average, the monetary stance would be somewhat contractionary next year. 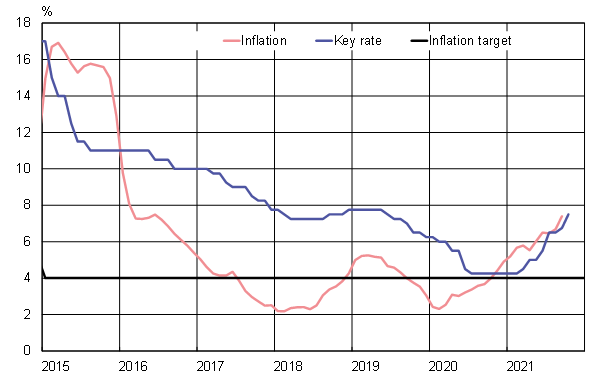