The financial troubles of Evergrande, one of China’s largest construction companies, began to make headlines last summer (BOFIT Weekly 34/2021). In recent weeks, the news has grown more dire. At the end of August, the company announced it could no longer meet all of its debt obligations unless it could continue building, selling off assets or refinance its loans. Evergrande was forced this month to postpone certain payments on its bank and trust loans, as well as payments on asset management products it had itself issued. The firm announced on Wednesday (Sept. 22) that it had settled maturing domestic bond coupons (232 million yuan or $36 million). On the following day (Sept. 23), the company was unable to pay off coupons on time on its foreign-issued dollar-denominated bonds ($84 million).

Concerns that Evergrande could become insolvent and the resulting contagion to the real estate sector and economy caused share prices around the world to plummet. Fears of a market meltdown quickly vanished, however, and most share indices recovered somewhat in the following days. Mainland China bourses were closed for holidays on Monday and Tuesday, so China’s general stock indices remained quite steady. Moreover, Evergrande’s difficulties have received relatively little coverage in China’s official media. The lack of news to some extent is the result of a campaign launched in late August to crack down on anyone disseminating information that could be seen as besmirching China’s financial markets or providing distorted interpretations of economic policy or economic indicators (BOFIT Weekly 36/2021).

Although Evergrande’s situation looks precarious, international credit rating agencies and others are cautiously hopeful that an uncontrolled collapse of the company will be avoided. Last week, for example, Fitch declared that even if some kind of default is likely, Evergrande’s problems were manageable, but warned that the company’s payment woes could impact several sectors. S&P followed this week with a similar message, stating that Evergrande was unlikely to create a systemic crisis for China’s financial sector even if it would default and that the government has capacity to intervene in markets if there is a threat of broader contagion. According to the stress test results released by the People’s Bank of China this summer, the rise in non-performing loans in the real estate sector should not pose a systemic-level threat to the banking sector. However, certain banks, e.g. Shengjing bank, are believed to have a major exposure to Evergrande debt. For those banks, the company’s inability to service its debts can pose a huge challenge.

Officials need to handle the situation with great care. Chinese officials have fought for years to reduce indebtedness of the real estate sector. A year ago, they imposed three red lines on real estate developers, which set limits to their indebtedness, while at the start of this year, bank lending to the sector was also restricted (BOFIT Weekly 6/2021). Evergrande, however, had already crossed all three red line before they were imposed. Officials have also sought for years to disabuse investors of their belief that the government will always come to their rescue as a lender of last resort and make them whole on any losses suffered. On the other hand, officials need to keep a handle on the situation by demonstrating an ability to prevent contagion to the rest of the real estate sector, the financial sector and the economy as a whole. 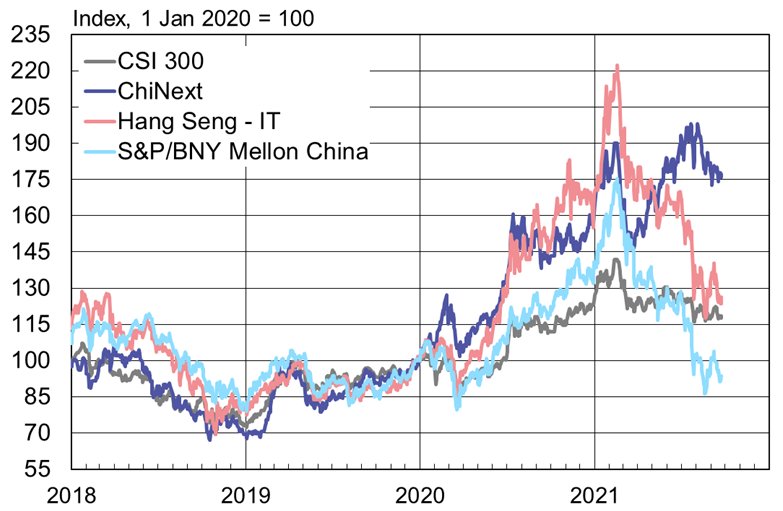