Real on-year growth in retail sales fell to just 0.9 % in August, a rate so low that average two-year annualised growth turned slightly negative. Retail sales in yuan terms fell most in the case of communications devices (down by 15 % y-o-y) and cars (down by 7 %). Some of the drop-off in retail sales reflects the spread of covid infections to various provinces during July and August that forced officials to impose new restrictions on movement and assembly. In addition, a component shortage has delayed automobile deliveries and put a crimp in car sales. New infections were again on the rise in September, particularly in southwestern provinces.

Industrial output growth slowed in August to 5.3 %. Unlike retail sales, the slowing growth in industrial output merely reflects a settling back to pre-pandemic growth levels. Additionally, the manufacturing purchasing manager indices (PMIs) fell in August close to the zero-growth 50-point mark, i.e. the period of rapid recovery from the Covid recession is apparently over. Although growth of high-tech industrial output generally remained strong (up 18 % y-o-y), car production dropped by 13 % due to the component shortage. According to the PMIs, the volume of new manufacturing orders declined in August, while the number of new export orders has been falling since May. Even so, August export growth remained strong in dollar terms (up 25 % y-o-y and average two-year annualised growth of 17 %). In addition, imports rose briskly in dollar terms (up 34 % y-o-y, average two-year annualised growth of 14.5 %). The trade surplus has remained at record high levels in recent months.

Producer price inflation, which has been high for several months, increased further to 9.5 % y-o-y in August. Much of the increase has been driven by soaring commodity prices. The largest increases in producer prices were seen in the energy sector (coal, oil), as well as the metals and chemical industries. In addition, producer prices for manufacturing of electrical machinery & equipment hit their highest levels in ten years (producer price inflation was 6 % in August). Consumer price inflation (CPI), however, has remained modest, even falling slightly in August to 0.8 %. CPI continues to be subdued by lower food prices (down by over 40 % in August) as the pork prices, in particular, have returned to levels not seen since the African swine fever epidemic broke out. However, also the core inflation, i.e. CPI excluding volatile food and energy prices, dipped slightly in August to 1.2 %.

Retail sales growth has come to a standstill in recent months, while industrial output growth is back to pre-pandemic levels. 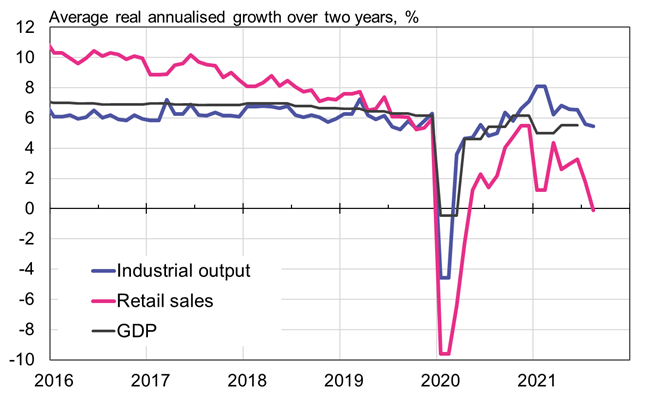