In our latest Forecast for Russia, we see Russian GDP rising this year by over 3.5 % from last year’s recession. Growth should slow in 2022 and 2023 to slightly over 2.5 % a year, towards Russia’s long-term growth prospect, because no broader systemic changes are in sight that would improve the functioning of markets and the pace of economic growth in the next few years.

A number of other factors also influence growth in the forecast period. The covid pandemic will restrain growth next year, while some growth-supporting determinants have improved. The price of oil is up currently and market expectations of its gradual decline have become more temper and see the price at around $65 a barrel in 2023.

Improved forecasts for the global economy support Russian export volumes. With the easing of oil production ceilings in the OPEC+ agreement this summer, the outlook has improved for Russian oil exports, and for gas exports as well. Russia’s revenues from travel (over 2 % of total export earnings in 2019) should also recover in the later part of the forecast period.

With a growing economy, rising household incomes and employment will increase private consumption to the extent that it should slightly surpass the 2014 peak in 2023. The rise in pensions should exceed projected inflation by a couple of per cent in line with the 2019−2024 pension hike plan. Just recently ahead of the upcoming Duma elections this Sunday (Sept. 19), president Putin announced that pensioners are to receive one-time lump-sum payments that should provide a temporary push to consumption. Consumption should also see increases with the yet-to-happen unwinding of the unusually high accumulation of household assets last year. Travel abroad from Russia fell extremely low last year, which should reverse at a good pace in the out years of the forecast period.

The recovery in fixed investment will continue, and investment should exceed the 2012−2014 level by 2023. While the rise in fixed investment is not expected to be very rapid, as e.g. industrial capacity utilisation remains quite low, the government is planning extending financing from the National Welfare Fund for select projects in the close-by years. The aim is also to get corporate investment participate, thereby increasing the amounts of investment to the extent that the firms’ other investment plans do not get crowded out.

Russian goods imports, as well as imports of services other than Russian spending on travel abroad, should increase quite well as GDP rises. The growth in imports, however, will be limited by the ruble’s real exchange rate, which is expected to remain fairly stable as Russian inflation should only slightly outpace inflation in Russia’s trading partners. The recovery in spending on travel will increase Russia’s total imports substantially as it accounted for 10 % of the total in 2019 before it collapsed. Russia’s total imports should shorten their gap to the 2012−2014 peak to one tenth. Russia’s current account surpluses will remain substantial throughout the forecast period.

There are no signs that the government is considering reneging on its current plan to reduce the budget deficit (similar policies were also pursued in the wake of the 2009 and 2015 recessions). Rising fiscal revenues and improved revenue prospects from higher oil prices will translate to smaller deficits. This allows easing up on the plan’s tight spending estimates.

Several significant uncertainties surround this forecast. The course of the covid pandemic, as well as global economic growth and oil prices, could experience deviations from expectations. Global markets and Russia’s relatively non-integrated markets could generate inflationary pressures, which unleashed would increase the erosion in the purchasing power of households, companies and the state.

Higher-than-expected investment is also possible if companies join in the government-financed projects in ways that raise their investment overall. Increased government budget revenues will create a lot of room for higher budget spending. Certain post-recession upturns are still ahead and hard to predict. Covid situations, the speed at which borders reopen or when international travel returns to normal may vary. Surprise bumps in household consumption may appear with the unwinding of the household savings. 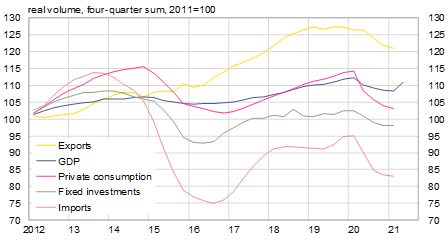