Our most recent Forecast for China 2021–2023, published last week, sees China’s on-year GDP growth hitting 8 % this year. This is due to the strong recovery from the covid pandemic as well as last year’s low basis reference. The speedy phase of the recovery is over, however. We expect lower growth in the years ahead as the pace of economic growth inevitably falls below pre-pandemic levels.

The Covid recession was quite brief in China’s case thanks to its aggressive suppression strategy and focus on channelling stimulus to firms and investment projects. However, there is also a dark side to the suppression strategy. Private consumption, in particular, has been hit hardest as the government has focused on a total suppression in combatting the virus as it continues to force provinces into lockdown. On the bright side, more than 70 % of the Chinese population has been fully vaccinated. Generally robust stimulus efforts around the world and an improving outlook for the global economy should support demand for Chinese exports, which in turn will keep industrial output humming in coming quarters. High capacity utilisation also bodes well for growth in industrial investment. Although the large covid stimulus is now behind, fiscal policies will continue to support growth, so that the public sector deficit remains large in the years ahead. Monetary policy must increasingly seek a balance between financial market risk and reducing indebtedness on one hand and preserving economic stability on the other.

The forecast sees quarterly GDP growth remaining around 1 % this year and next, before slowing further in 2023. On-year growth similarly falls to 4 % next year and close to 3 % in 2023. China’s unfavourable demographics are a major factor subduing growth. According to just-released census data, China’s population is ageing, the number of working-aged persons is declining and the birth rate has fallen faster than previously expected. In addition, extremely high debt levels and rising debt-servicing costs make it increasingly hard to deploy capital optimally. On the other hand, if China succeeds in reining in indebtedness, this will equally restrain growth at least in the short term. Productivity has been sluggish and actions to improve productivity have been few and far between. Recently, greater regulation and government oversight has been imposed on private firms in ways that have made the operating environment less predictable and thereby weakened their productivity. The role of the state has increased at various levels of Chinese society and political risk has risen.

There is a possibility of higher growth in the coming years if household consumption demand strengthens more than estimated. This could occur if the pandemic recedes faster than expected or China adjusts its pandemic strategy by lifting most covid restrictions. Demand could also strengthen if the government moves ahead with reforms that support consumption under the guise of the new common prosperity initiative. At the same time, the familiar risks of lower economic growth have increased during the pandemic. Growth could be significantly weaker than forecast if the debt burden becomes unbearable, financial market disruptions feed real economy uncertainty that generates social instability, or foreign relations hit an impasse. 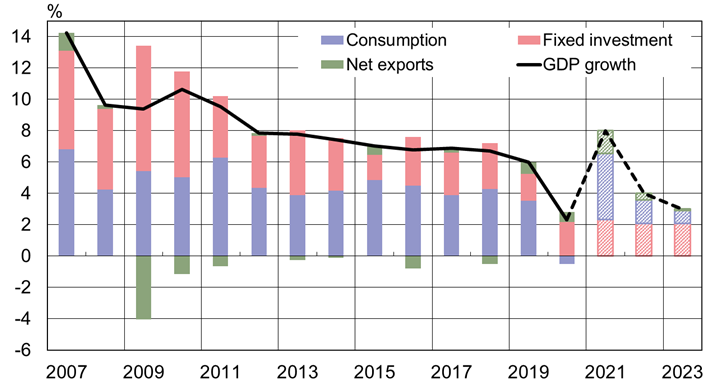