July real estate sales measured by floorspace declined by 9 % y-o-y. Two-year average annual growth was zero. The value of real estate sales measured in yuan also declined from a year earlier, but was up from the two years ago. The 12-month growth figures for housing sales were disturbed by a collapse in housing sales in the first half of 2020 and a corresponding uptick in sales growth in the first half of this year.

Reliable data on housing price trends in China are notoriously scarce. Figures posted on the privately operated SouFun real estate portal suggest a very stable, modest rise in housing prices in China’s biggest cities (about 4 % y-o-y). July prices were still up on average by 6 % from July 2019.

Officials have tried to reduce the risk exposure of the heavily indebted real estate sector through tighter regulation and limits on access to cheap financing (BOFIT Weekly 6/2021). In recent months, officials have intervened in e.g. banks’ illicit use of business loans for the real estate sector and increased reporting requirements of developers seeking to raise money through commercial paper issuance. As access to cheap financing has dried up, developers have turned increasingly to their sales revenue streams to keep going. This shift has reduced the number of new housing starts. In July, new construction starts based on floorspace were down by about 20 % y-o-y. Despite a slight increase at the beginning of last year, the number of units available for purchase has been generally falling in recent years and is well below the 2016 peak.

Evergrande, a conglomerate that expanded its operations beyond the real estate sector, currently finds itself in a world of hurt. The company’s problems were compounded in July after a court froze its assets due to unpaid bills. Moreover, some banks have ceased to grant housing loans on apartments built by Evergrande. The international credit rating agency S&P lowered Evergrande’s credit rating two notches to CCC in late July. Fitch and Moody’s have also cut Evergrande’s credit rating. Evergrande claims to have reduced its debt from 836 billion yuan a year ago to 570 billion yuan ($88 billion) at present. S&P estimates that the company must pay over 240 billion yuan in bills over the next twelve months, of which 100 billion yuan in payments comes due before the end of this year. The share price of Hong Kong-listed Evergrande has fallen by nearly 40 % over the past month and by over 70 % since the start of the year.

The PBoC and the China Banking Regulatory Commission (CBRC) called Evergrande’s management out on the carpet last week, admonishing them to reduce the company’s debt risks and support stable development of financial markets and real estate sector. Evergrande’s management claimed that they were doing all they could to get the debt problem under control. They were seeking, among other things, to sell company’s electrical vehicle unit, property management businesses and the Hong Kong headquarters building. 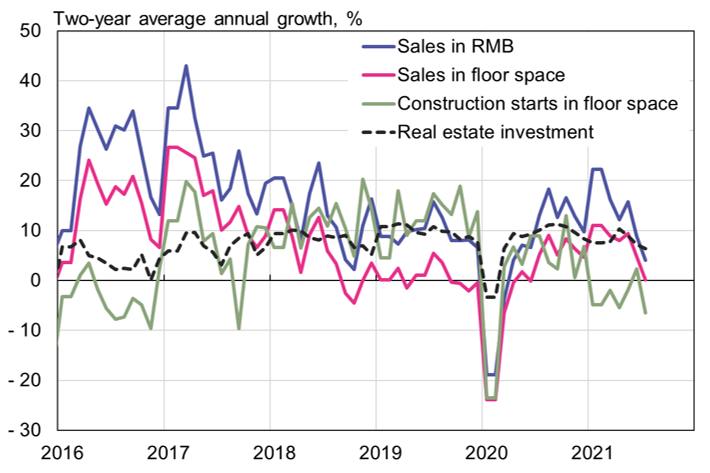