The OECD’s FDI Regulatory Restrictiveness Index measures investment restrictions on a scale of 0 to 1, where 0 signifies free access for foreign companies and 1 indicates a market that shut out foreign firms entirely. Using the OECD measure, the FDI barriers in China and Russia are roughly similar (0.2). The restrictions in these countries exceed the average of both OECD countries (0.06) and non-OECD countries (0.15). The index shows that regulation of China’s financial sector was relaxed in the 2000s, which has generally improved China’s index reading overall. Chinese media, however, is still heavily regulated. In Russia’s case, overall restrictiveness has increased during the 2010s. The financial sector is one of Russia’s most restricted branches at the moment.

According to UNCTAD’s TRAINS database, the most non-tariff trade measures globally are found in China (7,255) and the United States (6,757). In contrast, UNCTAD notes that Russia and the EU have relatively few measures in force (Russia 612, EU 417). Non-tariff measures comprise all policy measures excluding customs duties that affect volumes or prices of international trade.

The covid-19 pandemic has increased certain types of trade restrictions. The EU reports a total of 38 new trade barriers were applied by third countries due to the pandemic. UNCTAD says that most measures affecting global trade were implemented at the start of the pandemic in spring 2020, and that 60 % of those measures were still in force as of March 2021. Most covid-related trade barriers involve export bans designed to secure domestic supplies for healthcare and personal protection such as an adequate domestic supply of facemasks and other personal protection equipment. Some countries have also imposed export bans on staple food items for security reasons. On the other hand, UNCTAD says that over half of all covid-related trade measures, including tariff reductions, were intended to facilitate trade.

The number of trade barriers globally has increased in recent years, and the trend continues. China, EU countries and the US are all focused on measures to stimulate recovery of their own economies from the pandemic. The trade policy strategies of the major economic blocs tend to emphasise self-sufficiency and reciprocity more than before. Although negotiations of the EU-China investment agreement wound up at the start of this year, the European parliament moved to table its ratification in May. The EU and US in June reached a resolution after 17 years of talks on state subsidies to aircraft manufacturers, but a return to talks on a free-trade agreement appear to be in neither party’s interests. China-US trade relations have not shifted during the Biden administration. 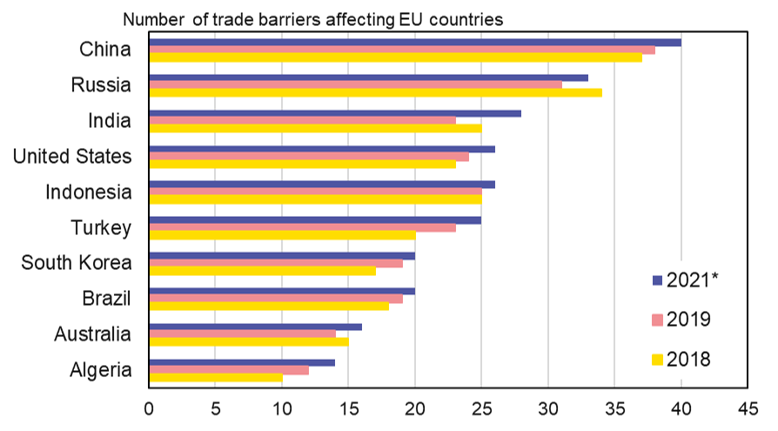