While Russian GDP recovered to pre-pandemic levels in the second quarter of this year, the pace of recovery in recent months has slowed. The July reading of the index of core sectors of the economy (agriculture, industrial production, construction, transportation, as well as retail and wholesale trade) remained unchanged from previous months. The annual growth figures are still high due to the low reference basis a year ago. Ministry of Economic Development estimates that GDP rose by 4.7 % y-o-y in July. The same ministry also reports that GDP grew by 4.8 % y-o-y in the first seven months of this year, and was up by 1.1 % from the same period in 2019.

Retail sales in July were unchanged from previous months, but the growth trends in most other service branches cooled down. Rising wages and improving labour market situation could support consumer demand in the months ahead. The average real wage was up by 5 % y-o-y in June. Unemployment fell to pre-pandemic levels, just 4.5 % in July.

July industrial output remained unchanged from previous months. Mineral extraction industries increased production as companies have been able to gradually raise crude oil production levels within the framework of the OPEC+ agreement. After conferring on Wednesday (Sept. 1), representatives of OPEC+ countries decided to keep in place the production ceiling framework agreed to in July. In contrast, manufacturing began to fade in July compared to earlier months. Growth in fixed investment remained brisk in the second quarter of this year supporting also construction. Construction activity was down in July, however, from the rapid growth of previous months.

Forward-looking economic indicators suggest no large changes in August. Economic growth should continue to slow gradually for the rest of this year. The most recent forecasts put the pace of Russian GDP growth at about 4 % this year. 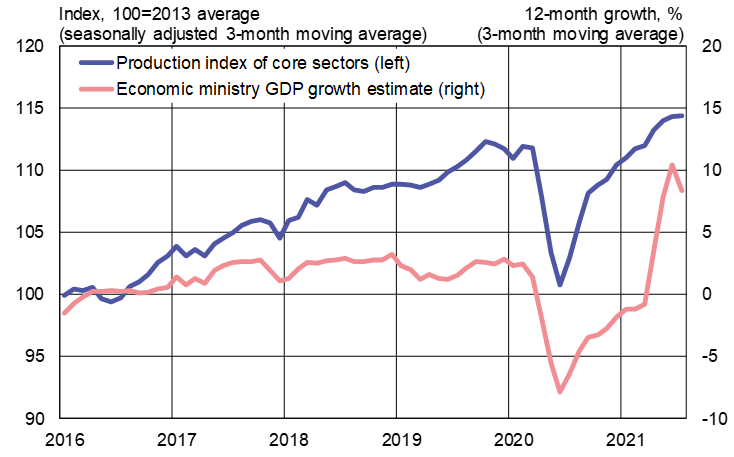