Real industrial output rose by 6.4 % y-o-y in July, a distinct drop from previous months when growth rates were still partly raised by the lower reference basis from the first wave of the pandemic. In essence, industrial output growth has recovered to its pre-pandemic trend, as the average on-year growth over the past two years is about 5.5 %. Both China’s official and the Markit manufacturing purchasing manager indices declined to a near-neutral level of 50 points in July (official 50.4; Markit 50.3), further indicating that most of the V-shaped drop and recovery has already occurred.

July real growth in retail sales (6.4 % y-o-y) suggests that consumer demand remains much weaker than in the pre-pandemic era with the two-year average annual growth falling below 2 %. Consumer demand also declined in July due to new restrictions imposed to deal with the spread of the delta variant. However, the service sector PMIs in July well exceeded the 50-point reading (official 53.3; Markit 54.9), indicating expanding market conditions.

Growth in foreign trade remained strong in July, as goods exports rose by 19 % y-o-y in dollar terms and goods imports by 29 %. The effects of the 2020 covid shock that caused a very low basis in 12-month comparisons is also passed with respect to annual trade growth figures, and is expected to moderate further in coming months. Moreover, the latest survey of manufacturing purchasing managers indicates that new export orders have been shrinking since May. Robust growth in China’s foreign trade has accounted almost solely for the recovery of the world trade. In June 2021, the volume of China’s goods exports was up by 21 % from the end of 2019. At the same time, exports globally were up just 4 % from pre-pandemic levels (and US exports lagged the pre-pandemic levels by about 5 %). As a result, China’s share of global exports climbed to 15 % last year.

Unlike industrial output, retail sales growth in China has remained weak this year 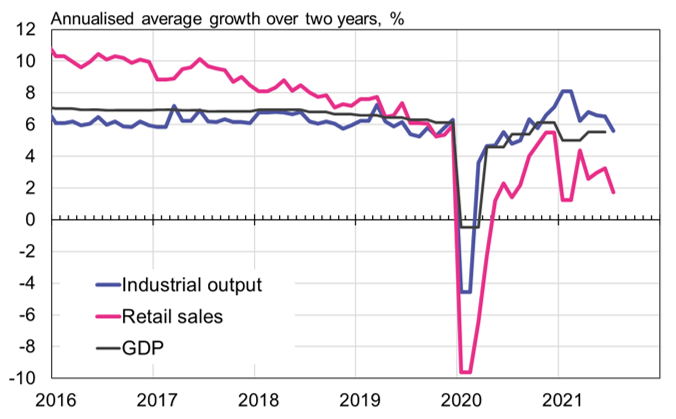