Finance minister Anton Siluanov told at the St. Petersburg International Economic Forum (June 2–5) that Russia plans to divest its liquid dollar-denominated assets in the National Welfare Fund and exchange them for assets in other currencies over the coming month. Currently, about 35 % of the Fund’s liquid assets are in dollars and about the same amount in euros. In the future, the Fund’s liquid assets will be deployed as follows: 40 % in euros, 30 % in Chinese yuan, 20 % in gold, 5 % in British pounds and 5 % in Japanese yen. Siluanov did not mince words; the move is needed to avoid the risks of further US sanctions. Russia has previously attempted to defend the government-sector economy and investments from harms caused by sanctions.

The total value of Russia’s National Welfare Fund at the end of April was about USD 186 billion, which was equivalent to about 12 % of Russian GDP. Of that amount, USD 116 billion was invested in highly liquid debt securities such as government bonds. The remaining assets were tied up in longer-term domestic investments (BOFIT Weekly 13/2021). Higher oil prices boost the Russian government’s tax take and increase the size of the Fund accordingly. As recently as summer 2019, the size of the Fund had dwindled to about USD 60 billion. The Central Bank of Russia invests liquid assets of the Fund in accordance with instructions from the Ministry of Finance (BOFIT Policy Brief 4/2015).

The CBR’s foreign currency reserves, including gold, reached an all-time high at the end of May 2021 with a valuation of USD 605 billion. Gold represented about USD 140 billion of that amount. The CBR reports on its quarterly allocation of foreign currency holdings with six-month delay. In September 2020, the asset breakdown for its forex reserves was 29 % in euros, 22 % in dollars and 12 % in Chinese yuan. Gold accounted for about 24 % of reserves. Russia’s reserve holdings of both gold and yuan are very high by international standards.

In 2018, the CBR shifted a significant chunk of its holdings from dollars to Chinese yuan (BOFIT Weekly 03/2019). It is worth noting, however, that the forex allocation differs from the geographic distribution of investments. For example, last September, about 7 % of Russia’s forex reserves were invested in US securities and deposits. The largest share of dollar investments was in assets issued by non-US entities. China, with a 15 % share, was the largest asset issuer country for Russia in September 2020. 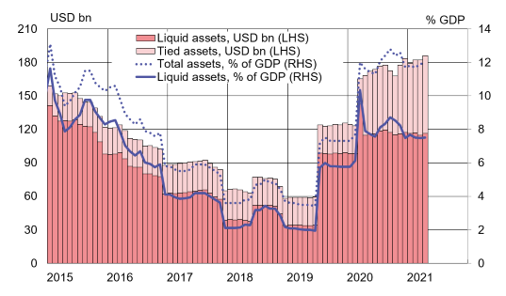