The Chinese currency has strengthened to a level last seen in early summer 2018. The yuan has gained 10 % against the dollar over the past twelve months. While part of this reflects general dollar weakness, the yuan’s nominal effective (trade-weighted) exchange rate (NEER) and the central bank’s trade-weighted forex index, CFETS, have both strengthened by about 6 % y‑o‑y. The yuan has also gained about 2 % against the euro over the past 12 months.

The strengthening of the yuan can be attributed to robust performance of the Chinese economy, a growing trade surplus and capital inflows. The yuan’s appreciation has triggered a surprisingly strong discussion in China. In a now-deleted post, the head of research at the Shanghai branch of the People’s Bank of China remarked that China could tolerate stronger exchange rate in order to subdue domestic inflation caused by rising global commodity prices. The director of the PBoC’s finance research institute also commented in a speech that China needs to move to a freely floating currency in order to achieve greater global use of the yuan, and that this will lead an appreciation of the yuan against the dollar over the longer run. The discussion got a quick response from the PBoC’s top officials. Deputy governor Liu Guoqiang commented that the PBoC does not seek to guide the yuan’s exchange rate and is not planning an overhaul of its exchange rate regime. According to Liu, the yuan’s exchange rate is set by the market. It has remained “basically stable” and the incumbent exchange rate regime serves China well now and in the future. The PBoC further stressed in a later post that is not possible to bet on exchange rate swings when rates are set by the market and all speculation should be avoided. It also underlined that the exchange rate cannot be used to support weak exports through depreciation or to offset rising prices through appreciation.

The PBoC nevertheless announced it was raising the forex reserve requirement for commercial banks from 5 % to 7 %, effective June 15. The forex reserve requirement was last changed in 2007. An increase in the forex requirement reduces the amount of forex available on the market. The official reason for the move was to strengthen the forex liquidity management of the financial sector, but the move was seen more as a signal that the PBoC is prepared to intervene to affect trends in the forex market. The impact of such measures on financial markets overall is marginal.

Forex deposits in mainland China banks have grown fast on rising export earnings and capital inflows. Their value in April was over $1 trillion (33 % y-o-y growth). The increase in the reserve requirement reduces liquidity by about $20 billion.

The PBoC has not officially intervened in the forex market for years, but it has many other measures in its monetary toolkit for influencing exchange rate trends, including guidance for state-owned commercial banks. China’s official exchange rate regime is a managed floating with a reference to a basket of currencies. In practice, the yuan’s exchange rate is permitted to fluctuate 2 % against the US dollar from the daily fixing midpoint rate set each morning. The PBoC’s dollar-yuan fixing rate is based on estimates from large commercial banks. The banks are supposed consider changes in yuan’s external value relative to the forex basket. From time to time, the commercial bank estimates were also expected to include vaguely defined “countercyclical factor” necessary to prevent excessive exchange rate swings. However, the use of a countercyclical factor was abandoned last October. Daily fixing rates are also set for other currencies with broader fluctuation bands. The freely convertible offshore yuan (CNH) traded in Hong Kong presumably exists outside this regulatory framework, but as a big chunk of CNH trading is conducted by China’s large state-owned banks, the CNH rate can also be affected. The CNH rate has recently stayed very close to the CNY rate. 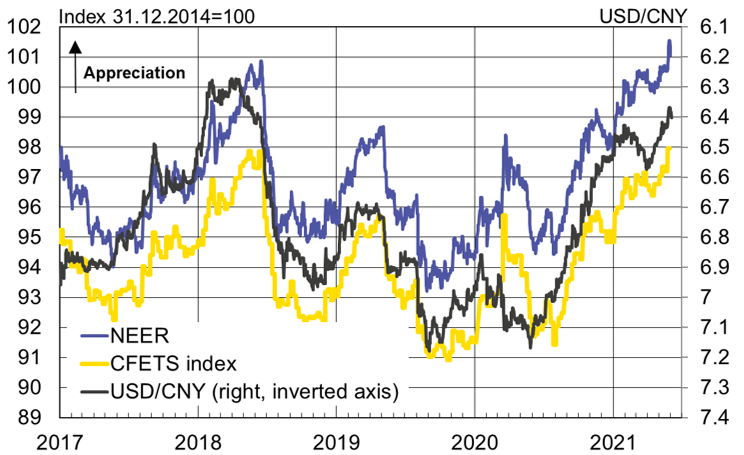