At the beginning of March, the value of Russia’s National Welfare Fund (NWF) stood at $183 billion, or almost 12 % of GDP. Most NWF assets are invested in highly liquid bonds and treasuries of foreign governments. Early in March, the value of such liquid investments was about $117 billion, which corresponded to 7.5 % of Russian GDP. Until recently, debt securities denominated in dollars and euros each made up about 45 % of holdings, with the British pound accounting for most of the remaining 10 %. In February, however, the finance ministry shifted some dollar and euro assets into instruments denominated in Chinese yuan and Japanese yen. At the beginning of March, Welfere Fund’s foreign currency allocations were 35 % dollar, 35 % euro, 15 % yuan, 10 % pound and 5 % yen. The CBR made a similar adjustment to its foreign exchange reserves already in the second quarter of 2018, when it shifted 15 % of its forex reserves into Chinese yuan. Compared to other countries, the large yuan share in Russia’s forex reserves and the NWF, the nation’s main sovereign wealth fund, is quite exceptional (BOFIT Weekly 3/2021).

About a third of NWF assets are invested domestically for the longer term. The largest domestic investment by far ($41 billion) is in Sberbank shares. NWF assets are also deployed as subsidised deposits with the VEB state development bank and two major commercial banks (VTB and Gazprombank).

Each year a share of tax earnings from oil & gas raised by the federal government is set aside under the government’s fiscal rule, whereby all revenues from oil & gas earnings above a reference price will be set aside and placed in the NWF. The average price of Urals grade crude last year was $41.60 a barrel, which turned out to be quite close to the reference price. The value of the NWF also fluctuates due to changes in the price of securities it holds and changes in exchange rates. 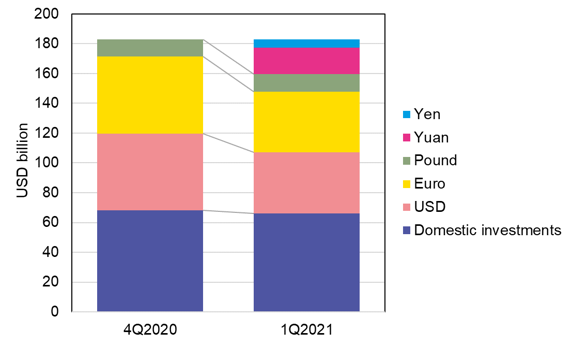