On May 20, the European Parliament voted to suspend temporarily ratification of the China-EU Comprehensive Agreement on Investment (CAI). In its press release, the European Parliament said it was postponing its consideration of CAI until after China lifted its counter-sanctions on European entities. China imposed sanctions in March after the EU imposed sanctions on Chinese individuals and entities for human rights violations in Xinjiang autonomous territory (BOFIT Weekly 12/2021).

The European Parliament took no stance one way or the other on CAI, but said that its review of the agreement must include consideration of the human rights situations in mainland China and Hong Kong. Ratification of CAI has been uncertain from the start as it aroused considerable opposition within the EU not just for China’s human rights record but for the lack of transparency (BOFIT Weekly 2/2021). China hopes that EU-China cooperation will continue.

Several days after the European Parliament’s vote, Lithuania’s foreign minister Gabrielius Landsbergis announced that his country was leaving the 17+1 group of countries of Central and Eastern Europe engaged in cooperation with China. Landsbergis said the group is divisive as far as EU common policy was concerned and hoped that all EU members would support a more unified approach to dealing with China. The 17+1 group was a cooperation platform established in 2012 consisting of China and countries from the Balkans and former Eastern bloc. Group members initially aspired to attracting Chinese investment and improving their opportunities for exporting to China. Many countries, however, have been disappointed by tepid investment growth and ongoing troubles in gaining access to the Chinese market. Countries have also begun to distance themselves from China due to its increasingly aggressive diplomatic posture. Quite exceptionally, China’s relations with Hungary have thrived under the arrangement. FDI flows from China to Hungary have risen steadily, and in coming years the Chinese computer-maker Lenovo will open a manufacturing facility in Hungary, while Shanghai’s best-known research university, Fudan University, plans to establish a satellite campus.

Many EU countries seem to be increasingly reluctant to make policy compromises for the sake of maintaining good trade relations with China. In addition to human rights, Taiwan’s status has traditionally been an issue complicating relations with China. In it press release, the European Parliament said that the EU-China investment agreement cannot be an obstacle to better EU-Taiwan economic relations. Lithuania also announced plans to open a trade office in Taiwan. 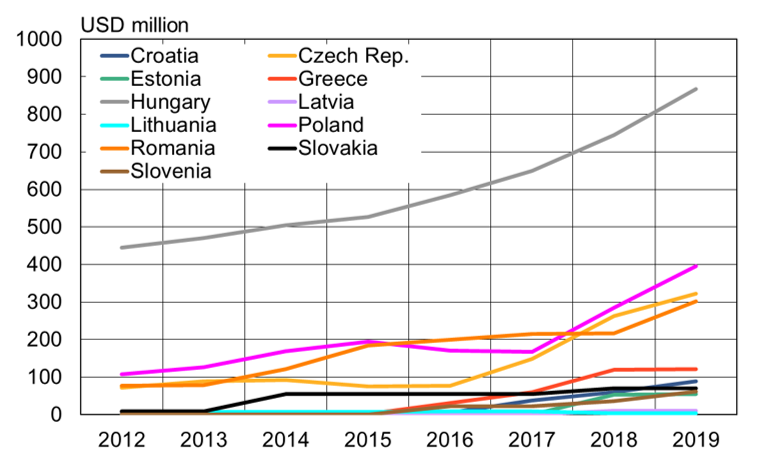