China’s National Bureau of Statistics reports the sold floor space of apartments has been much higher in the first quarter than in the first quarter of 2019 and in March prices for existing residential housing in Beijing and Shanghai were up by 10 % y-o-y. Price increased in the southern China cities of Guangzhou and Shenzhen have been even somewhat faster. Price trends elsewhere vary, but on average they are up considerably in most cities. However also price declines have been registered in such cities as Tianjin and cities in northeastern China. The rise in prices of new apartments was slightly slower than for apartment prices generally.

Officials have long been concerned about China’s high housing prices and the rapid rise in household indebtedness. Since last autumn, regulation of the sector has been intensified. New restrictions were imposed on bank lending to the real estate sector at the start of this year, while in Autumn the government presented measures that limit indebtedness of large builders (BOFIT Weekly 6/2021). The PBoC guided banks in March to hold off on lending in general, and followed up in April with demands for banks to adjust their lending structure. By some estimates, the regulatory crackdown has already depressed construction activity.

About 75 % of Chinese real estate investment goes to construction of residential housing. Construction of office and commercial buildings still account for over 10 % of all construction, but the investment has been declining for several years. The value in investment in office and commercial buildings in the first quarter of 2021 was similar to the first quarter of 2015. The trend reflects a shift to online commerce and increased possibilities for telecommuting that began already before the covid crisis. 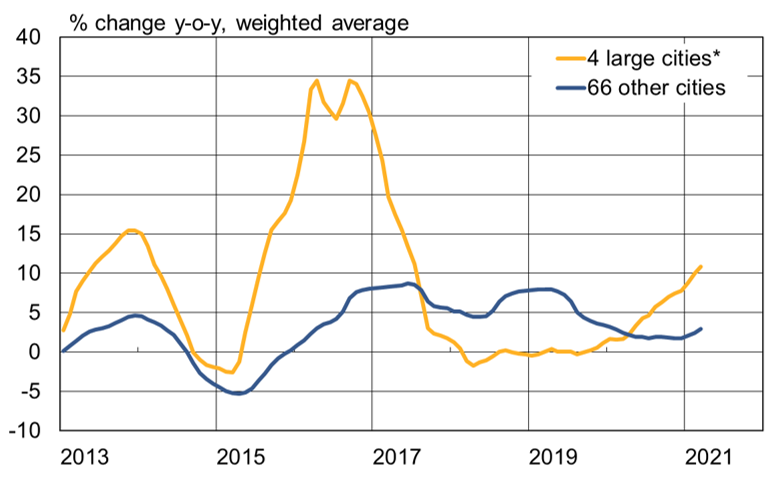