Although policy rates are still unchanged, the People’s Bank of China has begun to use other instruments in its monetary toolkit to quell rising indebtedness. Policy tightening should reduce financial market risk, but policymakers fear substantial tightening and higher rates could destabilise markets and weaken the ability of firms to service their debts.

The PBoC has kept its benchmark bank lending rate, the one-year Loan Prime Rate (LPR) at 3.85 % since April 2020. The LPR is based on the PBoC’s one-year medium-term lending facility (MLF) rate. Both MLF rates and standing lending facility (SLF) rates have been kept unchanged. The central bank uses reverse repos in its open market operations and their rates have also been unchanged. It has made no changes in the levels of bank reserve requirements during the past year. Interbank market rates rose briefly in the first quarter, but have since tracked PBoC policy rates.

In typical Chinese style, the PBoC has sought to stem lending growth by issuing direct orders to banks (“window guidance”). According to media reports, the PBoC instructed banks in March to keep their lending this year to last year’s level. Bloomberg reports that certain foreign banks have also been separately admonished to reduce their lending. The PBoC is worried about the rapid growth of the credit stock. According to media reports, banks were instructed to keep their first-quarter new lending no higher than year ago (7.1 trillion yuan) or preferably less. However, lending somewhat overshot the mark (7.7 trillion yuan) in the first quarter.

The bank lending stock grew by 13 % y-o-y in the first quarter of this year. The PBoC has announced its target of keeping growth in the credit stock roughly in line with the pace of nominal GDP growth. For example, the IMF expects China to experience nominal GDP growth this year of just under 12 %. At the end of March, the bank credit stock was about 170 % of GDP and the PBoC’s broad credit indicator, “aggregate financing to the real economy” (AFRE), corresponded to 278 % of GDP. The PBoC figures show that the ratio of AFRE to GDP fell slightly from the end of last year, due in part to reduction in the stock of shadow banking sector instruments. 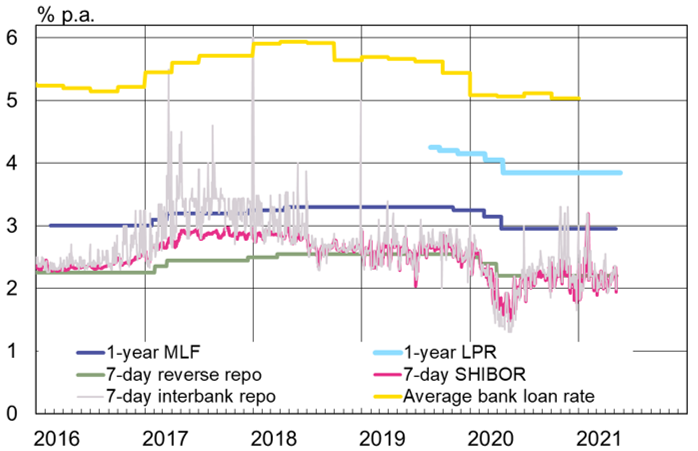