On April 15, United States officials at the behest of president Joe Biden announced new sanctions to take effect on June 14. The sanctions prohibit US financial institutions from participating in Russian sovereign bond issues or lending money to the Russian government. US officials said that the sanctions are a response to actions by the Russian government and its intelligence organisations against US sovereignty and its interests. At the same time, the US imposed sanctions on six Russian technology firms suspected of working with Russian intelligence officials in “malicious cyber-enabled activities” against the US and its allies. In addition, the US, European Union, United Kingdom, Canada and Australia imposed various new sanctions for Russia’s illegal annexation of Crimea.

Some of the new US sanctions were expected (BOFIT Weekly 15/2021), so markets largely shrugged off the announcement. The ruble weakened slightly, but was stronger at the end of the week than at the start. The Central Bank of Russia and finance ministry announced, however, that they are tracking the situation and are ready to support financial stability with a range of measures. Foreign investors have been getting out of the Russian bond market for a while. At the beginning of April, foreign investors held 19.7 % of government debt securities. At the peak in February 2020, foreign investors held about 35 % of Russian government bonds. During March, foreign investors still purchased about 10 % of new bond issues.

The impact of Western sanctions can be seen most clearly in their impact on Russia’s foreign debt. Since financial sanctions were imposed in 2014, the foreign debt of Russian banks and other sectors has declined substantially. In essence, sanctions have cut off parts of the Russian economy from international capital markets. It is also worth noting that Russia has not managed or even wants to compensate for its reduction in borrowing from e.g. the EU with borrowing from Chinese entities. As of end-March, Russia’s foreign debt was USD 459 billion, 37 % less than at the end of 2013. The foreign debt of Russian banks was USD 74 billion, or about a third of what it was at the end of 2013. Russia’s two largest banks, Sberbank and VTB, are ineligible for loans of over one month from creditors in the US or EU (for more on Western sanctions, see e.g. BOFIT Policy Brief 2/2019). 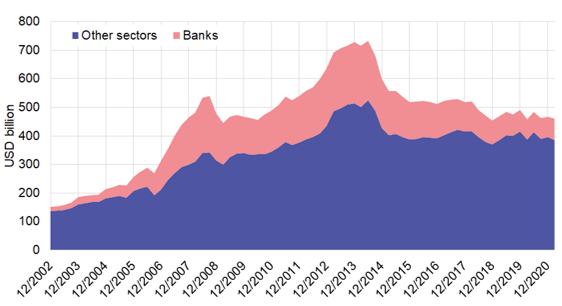