US secretary of state Anthony Blinken and national security adviser Jake Sullivan met with China’s foreign minister Wang Yi and China’s top-ranking diplomat Yang Jiechi in Anchorage, Alaska on March 18 and 19. It was the first high-level meeting of the two countries since Joe Biden took office. The first day of the meeting kicked off with both sides hurling criticism at each other. Things calmed on the second day, and both parties left the meeting claiming that the talks had been productive.

In the meeting, the parties found shared interests in finding solutions to global issues such as climate change, as well as dealing with third-country issues such as Afghanistan, Iran and North Korea. The biggest points of contention related to China’s human rights violations in Xinjiang, the ever-tightening grip on Hong Kong and new pressure on Taiwan. The meeting adjourned, as expected, without the issuance of a joint communiqué or announcement of major decisions.

The increased tariffs imposed during the trade war and the phase one US-China trade agreement in February 2020 are still in force on both sides. Moreover, the Biden administration has reiterated its commitment to doing everything it can to protect American companies and jobs. The US-China Phase One Tracker maintained by the Peterson Institute for International Economics (PIIE) shows that last year less than 60 % of the increases in Chinese imports agreed to under phase one had been implemented.

In response to US actions against China, China has again threatened to curb its production of rare earth metals and limit exports. Certain rare earths are essential to the American defence industry, including the manufacture of fighter jets. Rare earth metals are also used extensively in the car industry and production of 21st century technologies. China accounted for nearly 60 % of global rare earths production in 2020. The US, with 16 % of global production, was the second-largest producer. This share was up several percentage points from 2019 as the United States managed to boost its domestic output by over 35 % in just a year. With rising domestic production, imports fell by over 30 % from the previous year to $110 million. China still provides about 80 % of US rare earth metal imports. 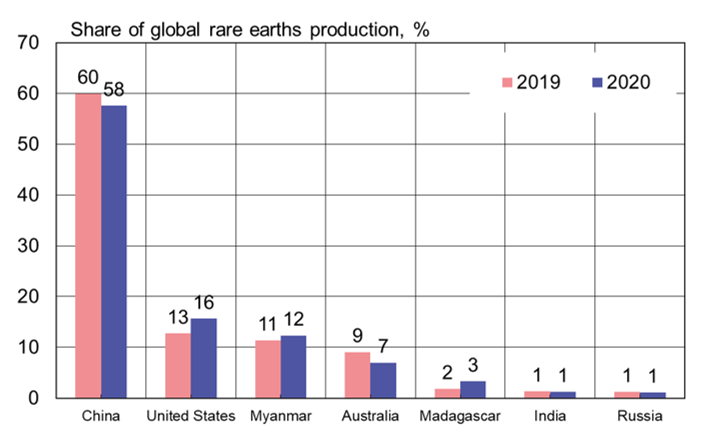 Sources: US Geological Survey and BOFIT.