Our most recent forecast for China predicts that the Chinese economy will grow rapidly this year at around 8 % p.a., a pace in line with major international forecasters. The high growth figure reflects last year’s low basis of comparison and a rapid recovery in the second half of last year. The rapid growth above the government’s official “over 6 %” target would leave an opportunity to pull back on stimulus measures. However, only mild fiscal tightening is expected this year and the rapid dive into off-budget indebtedness by local governments is expected to continue. Public finances have eroded rapidly and growth of public sector debt is likely to remain high. The government has limited room to tighten monetary policy as the growth in indebtedness has rapidly increased the debt-servicing costs of firms even at current interest rates.

During the out years of our forecast, 2022 and 2023, we expect quarterly growth to roughly match this year’s pace, meaning on-year growth will slow substantially to around 3 %, or closer to China’s long-term potential growth. We see that China could allow more modest growth levels without it having significant impacts on e.g. employment. This would allow the government to concentrate on policies to rebalance the economy and implement reforms that reinforce growth over the long run. There is, however, a risk that economic policy will remain obsessed with hitting high GDP growth target figures. This would exacerbate economic imbalances and heighten financial sector risks.

Lower growth should be expected for China as most of the slowdown reflects structural factors such as the shrinking working-age population. Moreover, the government has put off many reforms needed to improve productivity. The new five-year plan calls instead for increased self-sufficiency and an even greater role for the government in guiding economic development. Domestic consumption will not necessarily serve as the hoped-for engine of economic growth. China’s failure to implement supportive reforms hinders the growth of private consumption. As a result, China’s household savings rate remains high even as the rate of household indebtedness soars. Savings and indebtedness fall differently on each household, leading to ever greater wealth disparities.

Dealing with the covid-19 crisis has increased economic imbalances in ways that will depress future growth. China’s debt-to-GDP ratio is estimated to have risen last year by nearly 30 percentage points to close to 290 % of GDP. The impacts of the covid crisis on the economic condition of companies remains partly unclear. The forbearance programmes that allowed firms to postpone their loan repayments have been extended to this year. Deteriorating foreign relations also create risk to the Chinese economy. The US is not expected to ease up on its current China policies. The current technology export bans and withdrawal of US financing from certain Chinese firms will have concrete impacts on their operations. In the coming months, the Chinese government will likely seek to keep the political environment and financial markets stable while celebrations ramp up for the 100-year anniversary of the Communist Party of China in July.

Level of real GDP in the BOFIT forecast 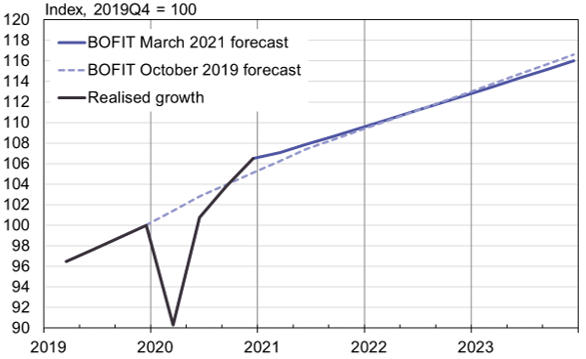