Our latest Forecast for Russia sees Russian GDP recovering from last year’s 3 % dip by growing nearly 3 % p.a. in 2021 and 2022. While the covid-19 pandemic is expected to ease when we enter next year, market expectations foresee oil prices turning into a gradual slide from the rise of recent months and going well below $60 a barrel in 2023. The global economy should show good growth. Next year Russia’s growth pace should pick up a bit with the return of oil output along with the expiration of the OPEC+ agreement on production ceilings. Following last year’s hike in government budget spending, the government plans to cut spending slightly in real terms this year and next to reduce the budget deficit. Economic growth will slow after 2022, gradually approaching Russia’s long-term growth prospects. Reforms such as shifts in official practices in a scale that would substantially improve Russia’s economic growth are not presumed.

The recovery in consumption will move ahead with consumption returning in 2023 to levels on par with those of 2014 and 2019. Recoveries proceed in employment and household incomes. General increases in government sector wages are expected to follow the pattern of the last few years in that they will stay at the level of inflation. Instead, pensions will rise about 2 % faster than inflation under an earlier government decision. Consumption will get extra to its turn when households spend their assets set aside during the recession to satisfy pent-up demand, and as travelling abroad unfolds properly.

The recovery in fixed investment plods ahead. Growth may be rather subdued as there is no pressing need to increase fixed investment anytime soon because capacity utilisation since early last spring has been at its lowest level in a decade. A major survey found that an increasingly large share of businesses sees factors limiting fixed investment such as economic uncertainty and investment risks. The long-term growth prospect of the Russian economy has been reduced somewhat by the fact that fixed investment since 2014 has been considerably lower than in the years 2012−2014.

The expected rise in the total volume of exports will be limited this year by uncertainties over Russian energy exports and the recovery of tourism. Exports next year will get support from the expiration of the OPEC+ agreement. At the same time, energy branch estimates suggest that exports of petroleum products will remain stable and natural gas exports will see a rather moderate increase, weighing on expectations of total export growth.

Russian imports overall are expected to recover partly this year, but the timing of the return of Russian tourism will affect considerably the pace of overall import recovery. The recovery in imports is supported by current higher oil prices and thus higher export earnings for Russia. On the other hand, the pace of recovery could be moderate as the ruble’s real exchange rate is expected to remain low due to Russia’s reasonable inflation and the gradual slide in oil prices. Imports will remain substantially lower than in 2011−2014.

Beyond the essential risk of a prolonged covid pandemic, our forecast identifies several other significant upside and downside risks. The recovery of economies around the world could be weaker than expected. A substantial drop in oil prices would press Russia’s private and public sectors, as well as import demand. The pace at which oil & gas production returns will significantly affect the pace of GDP recovery. Private consumption and imports, especially Russian spending while on travel abroad, could rather quickly swing with a lifting of travel restrictions and a release of pent-up household demand and assets built up during the covid crisis. The government could rapidly relax its current strict spending policies if needed.

While Russian GDP will grow, the recovery in imports probably takes long 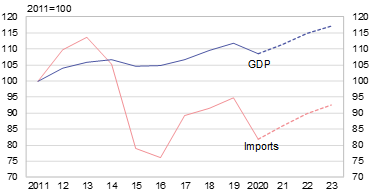