On March 19, the Board of Directors of the Central Bank of Russia decided at their monthly inflation meeting to raise the key rate by 0.25 percentage points to 4.5 %. Market analysts had generally been expecting the CBR to leave its main policy rate unchanged. The key rate was last increased in December 2018.

The CBR board commented that the decision reflected the recent burst of inflation. Russian consumer prices rose by 5.2 % y-o-y in January and 5.7 % in February. Although Russian producer prices fell considerably last year, they rose sharply in the first two months of this year, increasing by 7.2 % in January and 9.8 % in February.

Recent drivers of higher inflation include supply disruptions in the economy due to the covid crisis and rising food prices (BOFIT Weekly 11/2021). The CBR also points to a more rapid than expected recovery in domestic demand and that the inflation expectations of both households and businesses continue to be elevated.

CBR governor Elvira Nabiullina said that the central bank is at the beginning a gradual shift from an accommodating monetary stance to a more neutral one with a key rate in the range of 5–6 %. In accordance with the new guidance, a further hike in the key rate is possible at the CBR’s next inflation meeting. The CBR expects to hit its inflation target, i.e. a rise in consumer prices of around 4 % a year, by the first half of 2022. 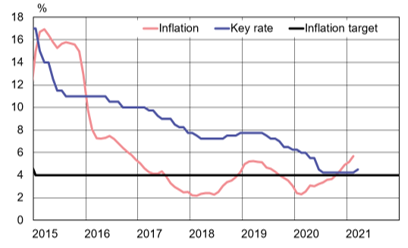