China’s central bank, the People’s Bank of China, and the State Administration of Foreign Exchange (SAFE) announced in mid-March the launch of a pilot programme to relax capital controls on ten large firms. The easing allows these firms to e.g. covert foreign currency freely within a set quota and integrates corporations’ yuan and forex cash pools which were previously required to be kept separate. The selected firms operate either in Beijing or Shenzhen, and include the oil major Shell as well as several of China’s large state-owned enterprises.

In February, SAFE announced that it was looking into the possibility of also deregulating household security investments abroad. At the moment, such investment is strictly regulated. SAFE is considering a measure that would allow Chinese persons to use $50,000 of their annual forex purchasing quota to buy foreign securities. In addition, it seems that the opening of “southbound” trading under the Bond Connect arrangement is moving forward. The programme would give Chinese investors the possibility of investing in bonds traded in Hong Kong. China’s stock of portfolio investment is currently similar in size to that of Sweden’s, which is very small given the size of the Chinese economy.

The deregulation measures are important steps towards opening the capital account. Most of deregulation efforts in recent years have focused on capital flows into China, but the new measures mainly apply to outward capital flows from China. The current deregulation effort has been helped by the yuan’s appreciation since last summer and expectations that the yuan will continue to strengthen against other major currencies.

The yuan has appreciated against the US dollar and the euro over the past year. The yuan’s real effective exchange rate (REER) has also strengthened. 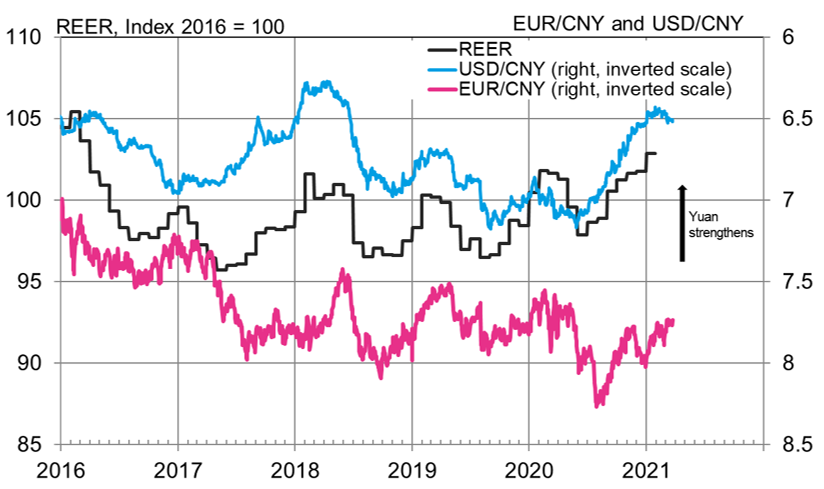