The value of goods exports from Finland to China last year was just 3 billion euros, a 13 % decrease from 2019. Finland’s exports to China contracted slightly more than exports overall (down by 12 %). Imports from China increased by 9 % to 5.4 billion euros, even as Finland’s total imports contracted by nearly 10 %. China’s share of Finland’s exports remained at just over 5 %, but its share of imports increased by a couple of percentage points to 9 %.

A quarter of Finnish goods exports to China consisted of wood pulp and over 7 % other wood and paper products. The value of forest product exports declined sharply from a year earlier. Machinery & equipment saw its share of exports increase last year by one percentage point to 33 %. The share of foodstuffs nearly doubled to 5 %. The value of meat product exports grew by over 100 % and dairy products by 56 % from 2019. The largest declines were registered in exports of hides and pelts (down by 56 %), as well as exports of iron and steel (down by 48 %). Both categories only represent about 2 % of Finnish exports.

Over half of China’s imports last year belonged again to the machinery, equipment & vehicles category. The value of such imports increased by 10 % in 2020. Due to the covid pandemic, Finland’s imports from China rose on higher imports of electronics devices and equipment needed to facilitate work, study and entertainment at home. Massive demand for facemasks and other PPE appears in Finland’s import figures under “other manufactured textile products,” a category that saw its value quadruple last year from 2019. The category’s share of total imports grew from 1 % to 5 %. In contrast, imports of clothing (10 % share) remained at the same level as in 2019, while imports of footwear (2 % share) fell by 13 %. The value of imports of pharmaceutical products rose by 114 % y-o-y, but their share of total imports was still miniscule (0.3 %). 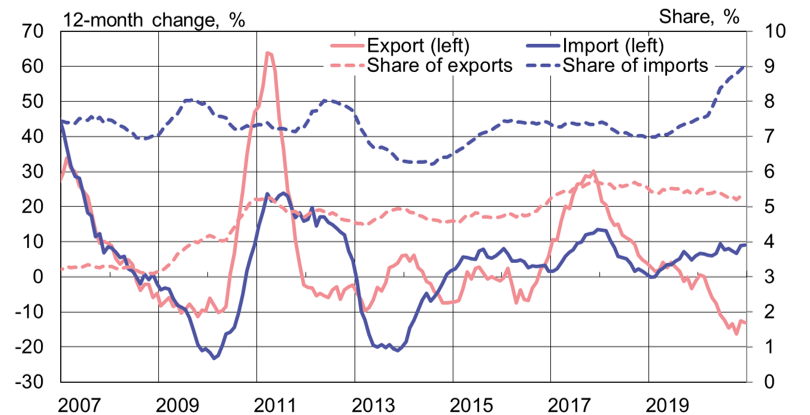