The World International Property Organization (WIPO) estimates that last year there were a total of 275,900 international patent filings under the international Patent Cooperation Treaty (PCT), a 4 % increase from 2019. China led the pack in patent applications (25 % of all filings). The next biggest filing numbers were in the United States (22 %), Japan (18 %), South Korea (7 %) and Germany (7 %). The number of patent applications in China increased by 16 % y-o-y, a significantly larger increase than for any of the other major patent-filing nations. Patent filings fell by 4 % in Germany and Japan.

Looking at filings of firms, the leader was Chinese telecom giant Huawei, which saw its patent numbers rebound to the 2018 level of about 5,500 applications. In 2019, Huawei filed about 1,000 fewer patents than in the previous year. The next most active patent-filers were the South Korean Samsung (3,100), the Japanese Mitsubishi (2,800) and the South Korean LG Electronics (2,800). Of the 50 most active patent-seeking firms, 15 were Japanese, 13 Chinese, 12 American and 7 European. European filers were led by the Swedish giant Ericsson (2,000 patents, rank 6th), the German Bosch (1,400 patents, rank 13th). The Finnish Nokia was the fifth largest European filer (600 patents, rank 39th).

The number of Chinese patent filings has surged in recent years 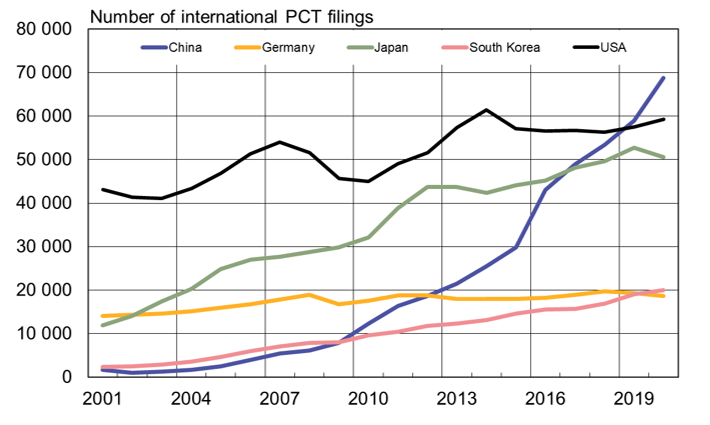