The National People’s Congress took up last year’s realised budget and approved this year’s proposed budget. According to the finance ministry’s budget report for 2020, budget revenues to the central and local governments fell by about 4 % y-o-y to 18.3 trillion yuan (18 % of GDP). At the same time, expenditures rose by 3 % to 24.6 trillion yuan (24 % of GDP). This resulted in a budget deficit of 6.3 trillion yuan, or just over 6 % of GDP. Over a third of the deficit was covered with state and local government savings funds and other assets, so the official deficit as announced was just 3.7 % of GDP.

In its projection for 2021, the finance ministry said that financial policy would continue to support the recovery of the economy. Budget spending, however, is expected to rise by less than 2 %, which, if realised, would be the smallest increase in over 30 years. The rise would even be lower than the announced inflation target. The finance ministry said it wants to make spending more effective and hopes to focus spending more precisely this year. Budget revenues are expected to grow this year by 8 %, so the public sector deficit should shrink.

The finance ministry is concerned about public finances, particularly increased pressure to boost government spending. Under the approved policy framework, more funding will need to be targeted at branches such as technology development, emissions reduction, education & training, quality of life improvement, national security and debt servicing. The challenge of balancing China’s public sector finances is daunting given the relatively low growth of public revenues. In addition, there is less to draw on from the covid-depleted state reserve funds. The inadequacy of assets in the Social Security Fund will grow more acute with the ageing population and pension hikes. Moreover, the ministry points out that the state of public finances varies greatly from province to province. Some regions have pronounced deficits and crushing debt burdens, while some local governments have continued to pile up unallowed “hidden” debt.

China’s reporting on public finances does not conform to Western accounting practices and the budgets taken up by the NPC do not cover all public sector spending or revenues. There is a considerable amount of off-budget activity, which include the issuance of “special purpose” bonds by local governments. This year, 3.65 trillion yuan in such bonds will be issued, which is only slightly less than last year’s 3.75 trillion yuan. The annual IMF broad assessment of China public sector finances takes into account off-budget activities and other factors normally included in budgets. The IMF calculates that China’s public sector “augmented” deficit has exceeded 10 % of GDP over the past five years, and that last year the deficit rose to over 18 % of GDP. The IMF puts China’s government debt at 92 % of GDP as of end 2020. 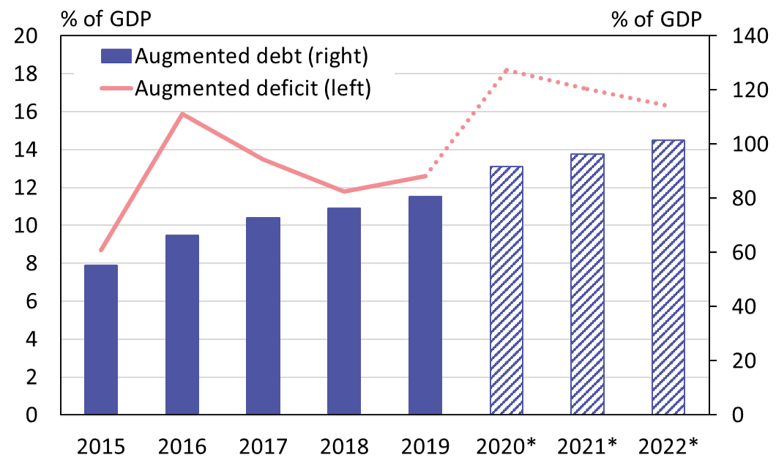