Preliminary figures from Statistics Finland suggest that the value of Finnish exports of goods and services to Russia contracted by about 20 % last year to around 3.5 billion euros. The declines were led by exports of services, which fell by over 40 %. Restrictions on cross-border travel imposed in both Finland and Russia to deal with the covid pandemic froze Russian tourism to Finland and dragged down the services exports. Russia accounted for about 4 % of Finnish exports, making Russia Finland’s seventh-largest export market. The value of goods and services imported to Finland from Russia declined by 36 % to about 6 billion euro. Russia accounted for 7 % of Finland’s total imports and was Finland’s fourth largest import market. Both exports and imports fell to around their lowest levels in two decades.

The more detailed breakdown of goods trade from Finnish Customs, which is based on a slightly different methodology, shows that the value of goods exported from Finland to Russia contracted by 21 % last year. The drop in exports reflected the fall in Russian demand and ruble depreciation from the covid pandemic and collapse in oil prices. In addition, 2019 was an unusual basis year as export figures were coloured by exceptional gas pipeline deliveries. Steel pipe sections for the Nord Stream 2 project were coated in Finland, which meant they were first recorded as imports to Finland from Russia and later as exports from Finland to Russia. If this gas pipeline activity is removed from the numbers, goods exports contracted by about 11 % last year. Exports fell in all major goods categories. The largest contraction (22 % y-o-y) was seen in the value of exports of machinery & equipment.

Customs statistics show that the value of goods imported to Finland from Russia contracted by 35 % last year. While most of this reflects the fall in oil prices, the volume of oil imports also decreased. Oil & gas account for about 60 % of Finland’s goods imports from Russia. The value of other significant imported goods such as wood and paper as well as various metals increased slightly last year. 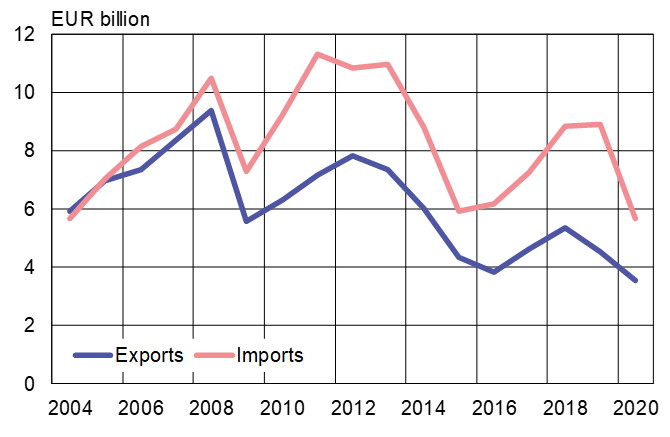