Russian crude oil production (including gas condensates) last year fell to 512 million metric tons (about 10.3 million barrels a day), a 9 % decline from the 2019 record level. It was the first decrease in Russian oil production since 2008.

The production drop largely reflects Russia’s participation in last spring’s agreement among the OPEC+ countries on new production ceilings. The agreement was finalised after it was clear that the covid-19 pandemic had caused a sharp drop in global oil demand and a collapse of oil prices on world markets. In combination with the recovery in oil demand, the OPEC+ agreement has supported oil prices. This has allowed participating countries to increase their production gradually under the agreement framework since last autumn. Yesterday the OPEC+ -countries decided to apply the production ceilings of March also in April. Russia and Kazakhstan are, however, allowed to slightly increase their production due to seasonal consumption patterns.

The current production-cut agreement extends to the first months of 2022, and thus will restrict Russian oil production throughout this year. OPEC’s market outlook published last month forecasted that oil production in Russia will contract by 2 % in 2021. Russia’s economy ministry expects that oil production could recover rather quickly once the restrictions are lifted and that the country could return to pre-crisis production levels in 2023.

Over the longer term, maintaining production at current levels is expected to require massive investment to bring new oil fields on stream. These fields are often located in areas with more demanding production conditions that drive up production costs. The economic crisis caused by the covid pandemic has limited corporate financing possibilities for investment. In addition, Western economic sanctions imposed on Russia restrict the access of targeted Russian oil companies to international financial markets and critical technology.

About half of Russian crude oil production goes directly to exports and some additional production in the form of refined petroleum products. Russia last year exported about 240 million tons of crude oil (roughly 4.8 million barrels a day), a drop of 11 % from 2019. Oil exports are expected to return gradually to growth as global demand recovers. About half of Russian crude oil exports still go to EU countries. The EU’s share of exports, however, has contracted significantly as the allocation to Chinese market has increased. China accounted for 28 % of Russian oil exported in 2019.

Alongside Saudi Arabia and the United States, Russia has long been a top producer and exporter of crude oil. In recent years, Russia has accounted for 13–14 % of global oil production and exports. 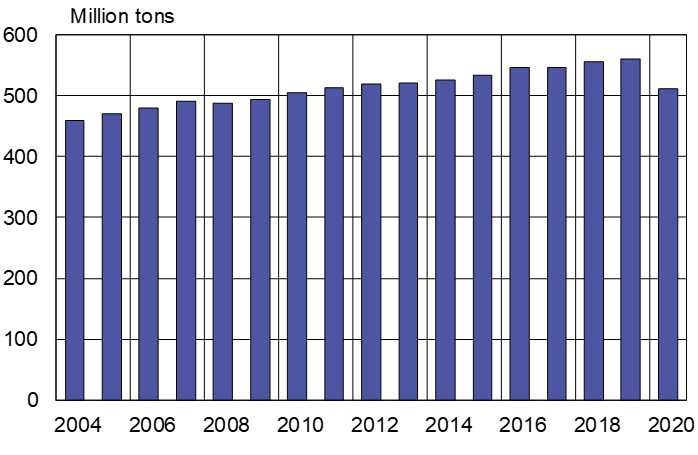