The global economic recession caused by the covid-19 pandemic and last year’s warm winter caused demand for natural gas in Russia’s main export markets, particularly the EU, to decline. Traditional pipeline gas exports contracted by about 20 billion cubic metres from 2019, and total gas exports in 2020 were not quite 200 billion m3. The lack of demand caused gas prices to fall considerably in Europe, with the value of Russia’s gas exports contracting by 40 % from 2019. The contraction in export demand also caused production of natural gas to decline. Russia last year produced 600 billion m3 of natural gas, a drop of 7 % y-o-y. Production of associated gas (typically off gases from production that contain other hydrocarbons such as ethane, and in contrast to dry gas, which is mostly methane) remained at 96 billion m3, unchanged from the previous year.

Despite a decline, exports of pipeline gas reached a significant milestone in 2020 with the inauguration of Russia’s first gas export pipeline to Asia. The Power of Siberia pipeline enables Russian gas exports to China. Although less than 5 billion m3 passed through that pipeline last year, exports are expected to rise gradually as production in Eastern Siberia will ramp up. Exports via Power of Siberia should eventually reach close to 35 billion m3 a year. Most Russian gas exports (traditional pipeline gas and LNG) will still go to the EU market. 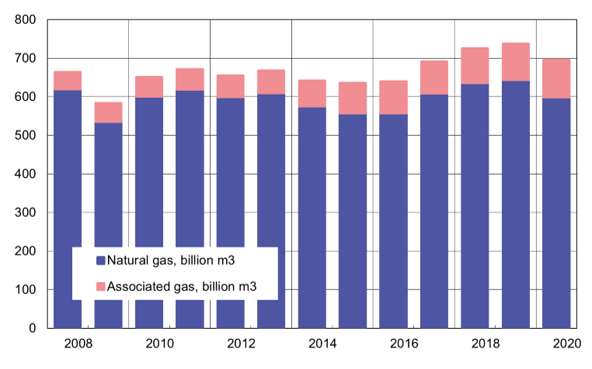