China made a significant shift in climate policy last September with president Xi Jinping’s announcement that the country would seek to be carbon neutral by 2060. Under the Paris climate accord, China is committed to ending growth in carbon emissions by 2030. The announcement, which preserves Paris targets, also adds some new stricter targets. China will now seek to reduce its carbon intensity (ratio of CO2 emissions to GDP) to at least below 65 % of the 2005 level by 2030 (the earlier target was a range of 60–65 %). In addition, China seeks to increase the share of non-fossil fuels in energy consumption mix to at least 25 %, up from an earlier goal of 20 %. At the moment, that non-fossil energy component is only about 16 %.

During 2017–2019, growth of China’s carbon dioxide emissions averaged 1.6 % a year. Over the same period, carbon emissions declined in the EU and US. The Global Carbon Project, which has studied emissions since the start of the 2000s, estimates that global carbon emissions declined by 7 % last year due the effects of the covid-19 pandemic on industrial production and travel restrictions. While emissions in China also declined by nearly 2 %, it was relatively little compared to the 11 % reductions registered in the EU and US.

The impact of covid-19 on emissions within China was minor, however, because the lockdowns in early 2020 were short and output revived quickly in the spring. In addition, the Chinese government continued to apply economic stimulus. These policies include investment in new coal-fired power plants, even if coal is by far the country’s largest source of carbon emissions. China is also a major investor, consumer and producer of renewable energy technologies, yet the share of renewables in China’s energy palette has only grown slowly (BOFIT Policy Brief 14/2020).

The new climate targets have accelerated development of the national emissions trading system, which has been tested and developed for years at the local level. For example, the city of Beijing has long experience with a carbon-trading scheme that covers power plants, cement plants, petrochemical plants, as well as other industrial enterprises. Civil aviation was also included in the Beijing scheme last year. Although the launch of emissions trading at the national level has been postponed several times (BOFIT Weekly 32/2020), it now appears that it will officially launch on February 1, 2021, when the new rules enter into force. Getting the trading scheme up and running, however, may take time. By some estimates, the system will be operational at earliest by this summer. The initial “trial period” runs from January 1 to December 31, 2021. It covers the 2019 and 2020 emissions of 2,225 enterprises in the energy sector. The number of firms under the scheme will gradually increase in coming years as other large energy-intensive producers join the scheme. China’s national carbon-trading scheme is expected to be the world’s largest such trading scheme.

Even with a global pandemic, China’s CO2 emissions appear to have barely dipped in 2020 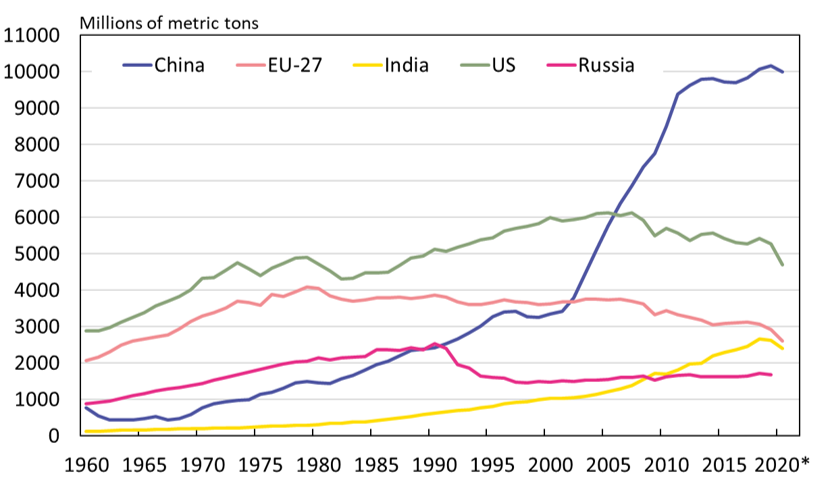 Sources: Our World in Data, Global Carbon Project and BOFIT.