The People’s Bank of China reports that the combined domestic debt of corporations, households and the public sector increased last year to a level equivalent to 280 % of GDP (285 trillion yuan or 36 trillion euros), up from 255 % of GDP in 2019. When China’s foreign debt (which the PBoC estimates to be 14.5 % of GDP at the end of June) is included, total debt rises to about 295 % of GDP.

Due to the covid crisis and related measures, the debt-to-GDP ratios of many countries increased significantly last year. Figures from the Bank of International Settlements (BIS) for over 40 countries suggest China’s the increase in debt-to-GDP ratio from the start of 2020 to end of June was quite ordinary compared to the other countries. China’s debt-to-GDP ratio, nevertheless, is distinctly higher than in other emerging economies and on par with US and euro area, which have more developed financial markets.

China’s piling on of debt has long raised concerns among observers of the Chinese economy because rapid descents into indebtedness in other countries have typically led to major economic collapse or severe banking crises. Moreover, China was already engaged in efforts to bail out small and medium-sized banks before covid-19 struck, with so at least 500 billion yuan (BOFIT Weekly 40/2020) in public funds already expended. The lion’s share of Chinese debt exists in the form of bank loans taken by the corporate sector. During the covid pandemic, certain branches experienced significant declines in the ability of firms to service their debts. Stress tests released by PBoC in November showed that 10 of 30 banks were would fail even under the mildest stress scenario, which only assumed that GDP growth would be 1.6 % in 2020 and 7.8 % in 2021. The stress tests comprised all of China’s systemically critical banks. 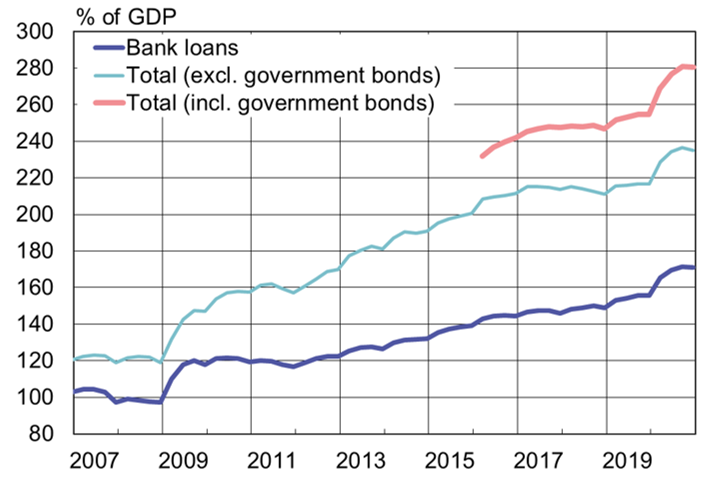 *) Official public debt, 45 % of GDP. IMF estimates general government liabilities corresponded to 92 % of GDP at the end of 2020.