China’s National Bureau of Statistics reports that GDP grew by 6.5 % y-o-y in the fourth quarter of 2020 and increased by 2.3 % for the year overall. In nominal terms, GDP was valued at 102 trillion yuan (about 13 trillion euros). While the economy recovered quickly from the economic collapse of the first quarter, the covid-19 pandemic prevented China from reaching its 2012 goal of doubling 2010 real GDP by 2020. No annual GDP growth target was announced for 2020. Chinese official growth figures have long been suspect. For example, the Bank of Finland’s updated calculations suggest that China’s first-half covid-dip was deeper and the subsequent recovery slower than official figures report.

The NBS announced in December that its revised figure for 2019 GDP had been adjusted slightly lower (2019 GDP growth fell from 6.1 % to 6.0 %). The largest downward revision was made to industrial output, adjusted by more than 500 billion yuan. Revised service sector output was raised slightly from the previous estimate.

For all of 2020, real industrial output increased by 2.3 % y-o-y, supported by a strong fourth-quarter performance (up 7.3 %). Construction output for 2020 grew by 3.5 % y-o-y. Service sector output rose by 2.1 % y-o-y. The hotel and restaurant branch, which has been clobbered by the covid crisis, experienced a real contraction of 13 % last year. Real on-year growth in the wholesale and retail branches was slightly negative (down 1.3 %), despite picking up towards the end of the year. Even if exports grew strongly in the second half of the year, they were only up by 4 % in dollar terms for the year as a whole. Imports contracted by 0.4 % in dollar terms.

Real per capita disposable household incomes increased by 2 % y-o-y last year. In urban areas, household incomes were only up by 1 % y-o-y, while rural household incomes increased by 4 %. Per capita household spending overall contracted by 4 % y-o-y in real terms. For city-dwellers, per capita household spending declined by 6 %, while rural residents continued to spend at about the same level as in 2019. Survey-based unemployment rate in urban areas fell back to around 5.2 % in December, i.e. the same level as in December 2019. It peaked at 6.2 % in February last year. Like official growth figures, China’s official unemployment figures do not give an accurate picture of the situation in China’s labour markets. 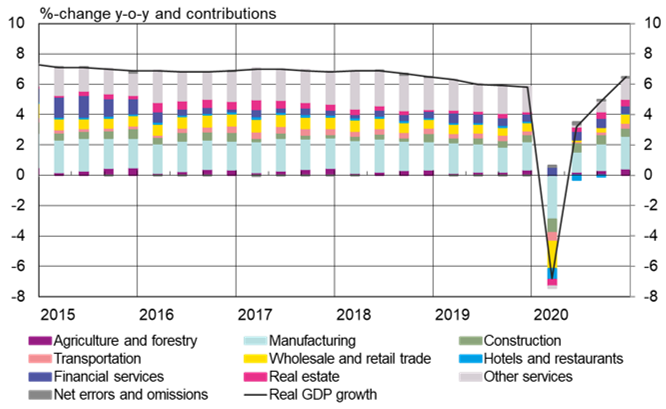