According to both the IMF’s just-released World Economic Outlook update and the World Bank’s latest forecast, the global economy contracted in 2020 slightly less than originally feared. The revisions have been largely influenced by a stronger-than-expected recovery in private consumption and positive news about vaccine development. Uncertainty about the 2021–2022 forecasts, however, remains large as new waves of infection and mutated strains of the covid-19 virus continue to emerge.

China is expected to grow considerably faster than the global economy again this year (about 8 % due to the low basis point last year). Media reports suggest that the same 8 % could also become China’s official 2021 GDP growth target. Growth is likely to slow next year, but will still remain at a respectably high level of about 5.5 %. China’s strong performance is unique among emerging economies.

The covid pandemic is generally considered to have inflicted long-term damage on emerging economies by reducing investments and stagnating development of human capital. Many countries have put off critical economic reforms for years into the future. The pandemic has had largest impact on countries heavily dependent on tourism, the service economy or commodity exports (oil in particular), as well as those that saw the largest domestic outbreaks. Countries in this latter group include India, which saw its economy contract by 8–10 % last year despite a solid economic recovery in the second half of 2020. The big uncertainty associated with India’s growth figures is also reflected in the wide range of recent forecasts. The largest contractions registered among the BRICS group of large emerging economies (Brazil, Russia, India, China and South Africa) were posted by India and South Africa.

South Africa, which has experienced the worst covid-19 case rate of any countries in Sub-Saharan Africa, was forced into lockdowns that caused the economy to contract by about 8 % last year. Without its broad-based programme of economic stimulus, the situation would have likely been considerably worse. Moreover, the expected rate of recovery in 2021–2022 is rather low. Economic growth in Turkey recovered briskly in the second half of 2020 on major stimulus efforts (with the result that the Turkish economy posted slightly positive growth for all of last year). Turkey’s near-term prospects, however, will depend to a large extent on the return of international tourism. The number of covid deaths per capita has been especially high in Latin America. Private consumption and fixed investment in Brazil, however, recovered at a rapid pace in the second half of 2020 due to favourable credit conditions and it is expected that economic growth this year would rise by more than 3 %. The Russian economy was hit hard last year both by covid lockdowns and the global collapse in crude oil prices. Russian GDP is now estimated to have contracted by about 4 % last year. The latest round of forecasts, however, expect a return to pre-crisis levels of economic growth as soon as the second half of 2021. 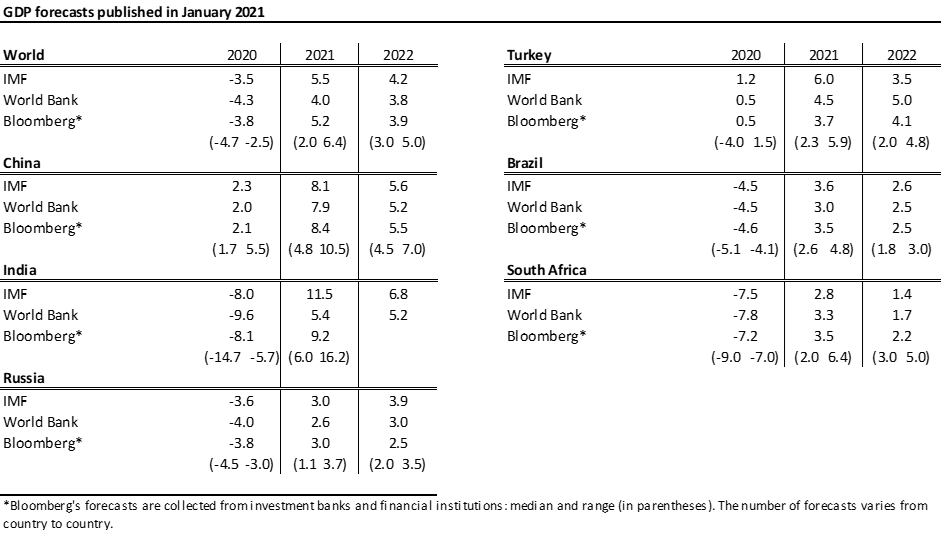