With a pandemic wiping away demand, the price of crude oil last spring collapsed to unprecedented lows. The price of e.g. Brent crude stabilised at around $40 a barrel in subsequent months after Russia and OPEC members (the OPEC+ group of oil-producing countries) reached agreement on production ceilings in mid-April. At that time, OPEC+ agreed to cut production by nearly 10 million barrels a day in May and June, and by nearly 8 million barrels a day in July-December 2020 (BOFIT Weekly 17/2020). The plan calls for a cut in oil output of nearly 6 million barrels a day through April 2022. While the parties to the agreement have generally held rather well to their agreed production ceilings, Saudi Arabia has unilaterally moved to support the price level through deep voluntary production cuts.

As the latest OPEC+ meeting wound up on Tuesday (Jan. 4), a vigorous discussion arose about how to continue with production ceilings. The matter was resolved with an exceptional solution – Russia was granted permission to increase its production by 65,000 barrels a day, even as OPEC members agreed to hold to their original production ceilings. In addition, Saudi Arabia announced that it would voluntarily reduce its production by 1 million barrels a day. As a result, the overall production of OPEC+ countries is on track to contract sharply. This has buoyed oil prices. On Friday (Jan. 8), the price of North Sea Brent was above $54 a barrel.

Even with the current price level at about double that of last March, it is still well below the average price during 2017–2019. As the Russian government finances are designed to tolerate the current price level, Russia may continue to press for increased production in order to retain market share. The finances of many OPEC members require significantly higher oil prices to achieve balanced budgets, which has made the cartel members amenable to efforts to restrain production to support prices. 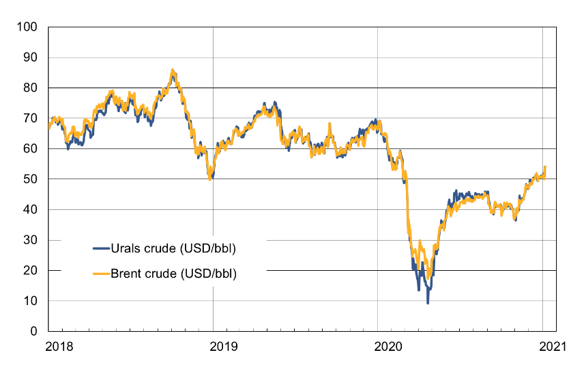