The economy ministry estimates that Russian GDP contracted by 3.7 % y-o-y in November, i.e. slightly less in on-year terms than in October. Much of the improvement came from reviving industrial output. November’s seasonally-adjusted industrial output grew by 1 % m-o-m. Anyhow, while industrial output growth has continued almost uninterrupted since June, the November industrial output figure was still lower by 2.6 % y-o-y due to the sharp drop in output last spring.

Production of extractive industries, which includes production of crude oil and natural gas, was still down by nearly 8 % y-o-y in November despite recovery in the autumn. The extractive industry sector has been depressed by crude oil production, which showed a drop of 11 % y-o-y both in October and November. Russia has limited its oil production as part of the OPEC+ agreement. Seasonally-adjusted manufacturing output recovered in November by nearly 1 % from October, and was up by about 1 % y-o-y. Growth in recent months has been strong in the chemical and pharmaceutical industries as well as several branches in the machinery & equipment category.

The volume of November retail sales was down by 3.1 % y-o-y, i.e. deeper than in late summer and the whole autumn (when the drop was on the order of 1–2 %). The November dip supports earlier assessments that household consumption demand in previous months included purchases in anticipation of covid-19 second wave. The Central Bank of Russia estimates that the November contraction in fixed investment slowed slightly from previous months, scoring about -3 % y-o-y. Due to the gradual recovery in industrial output, the volume of goods transport in November was no longer down by more than slightly over 2 % y-o-y.

The December reading of the composite purchasing managers’ index (PMI) showed a stabilisation of economic activity relative to November. The manufacturing PMI reading rose from 46.3 in November to 49.7 in December. New industrial orders contracted slightly, however. A PMI reading of 50 indicates that economic activity remains unchanged from the previous month. The December services PMI fell from 48.2 in November to 48.0 in December. New services orders and the volume of customers also contracted slightly. The CBR survey showed a slight uptick of consumer confidence in the economy in December.

Main sectors of Russian industry on a path to recovery since spring and summer, although extraction remains weak 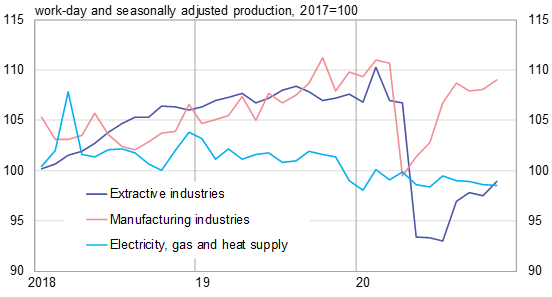