On December 18, the CBR decided to keep the key rate unchanged at 4.25 %, the level at which it has remained since last July. In issuing its decision, the CBR noted that it had not fully ruled out the possibility of a rate cut in following key rate review meetings.

According to the CBR’s October forecast, 12-month inflation was forecasted to be running at 3.9−4.2 % p.a. at the end of last year. Consumer prices, however, rose by 4.4 % y-o-y in November, and preliminary Rosstat figures show consumer prices were up by 4.9 % in December. The current acceleration in inflation is associated with higher prices for certain food items (BOFIT Weekly 51/2020), as well as increased inflation expectations on the part of households and firms. Ruble depreciation since last summer has also placed upward pressure on prices. At the end of 2020, the ruble’s exchange rate was still 6 % lower against the US dollar and 15 % against the euro compared to the beginning of June (and despite the ruble’s strengthening in the end of the last year on rising oil prices). From early November to the end of December, the ruble’s exchange rate has strengthened by 9 % against the dollar and 2 % against the euro. One dollar currently buys 74 rubles and one euro 91 rubles.

The CBR expects 12-month inflation to be running at 3.5−4 % at the end of 2021. Thereafter the expectation is that inflation will stabilise around 4 %. The CBR’s inflation target is 4 % p.a. 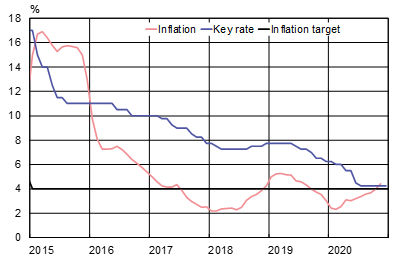