Despite a rapid recovery of the Chinese economy in recent months, the People’s Bank of China has kept its main policy rates unchanged since spring. Financing conditions have become tighter, however, and money market rates have risen with the phase-out of the coronavirus stimulus last spring.

The PBoC implements monetary policy with a diverse monetary toolkit. The PBoC’s medium-term facility (MLF), targeted medium-term lending facility (TMLF) and pledged supplementary lending (PSL) provided to commercial banks saw more loans come due than were issued during the April-November period. Interest rates under these lending programmes have been steady since April, including the benchmark 12-month MLF rate (2.95 %). Furthermore, the central bank’s open market operations (OMO) in January-November caused a net reduction in market liquidity. PBoC market operations are carried out by issuing reverse repo contracts. Their rates have been kept unchanged since March (2.2 % on a 7-day reverse repo).

The reserve requirement ratio (RRR) was lowered for all banks in January and further for some banks in March-May. Since then, however, the general RRR levels have remained untouched. The reserve requirement changes, open market operations and lending programmes have led to an increase in market liquidity over the first eleven months of this year of about 1.9 trillion yuan, which is only slightly more than the 1.8-trillion-yuan increase in the same period last year. In addition to these measures, earlier this year the PBoC granted a total of 1.8 trillion yuan in lending and discount quotas to help pandemic containment and support firms (BOFIT Weekly 16/2020), as well as financing aimed at supporting small businesses. Loans to small businesses that were coming due this year have been granted extensions to end-March 2021.

The loan prime rate (LPR), the reference rate on bank loans based on the MLF rate, has remained unchanged since April (3.85 % on a 12-month loan). The PBoC reports on a quarterly basis the average rate on bank loans, which has hovered around 5.1 % this year.

Fall in consumer prices is not expected to affect the monetary policy stance, as the current inflation drop mainly reflects swings in pork prices, and not a general weakness in demand. The official inflation target (3.5 % this year), which is set annually along with other economic targets, largely serves as a desired ceiling for price growth rather than an actual monetary target. China’s core inflation rate has remained below the inflation target value for years and the CPI inflation has been above last year’s target (3 %) and currently is significantly below the target.

Rising financial market risk from soaring indebtedness is more of a concern for PBoC. Even if the growth in bank lending slowed marginally in November from previous months, the stock of bank loans still increased by 13 % y-o-y. The PBoC measure of total financing (aggregate financing to the real economy) was up by nearly 14 %. Observers generally do not expect any further hikes in policy rates this year. Moreover, the PBoC has tried to calm markets by announcing that it will not act hastily on signs of economic recovery, but rather seek to keep monetary policy “normal” as long as possible. The interest rate gap between China and the rest of the world has widened, causing the yuan’s exchange rate to appreciate.

Since the spring, the PBoC’s monetary policy measures have decreased market liquidity on net basis 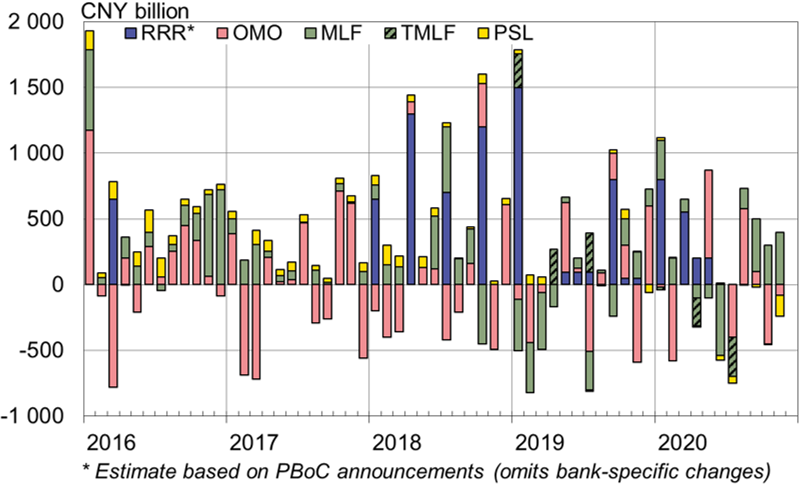