In dollar terms, the value of China’s November exports increased by 21 % y-o-y. Growth rate has now accelerated for six consecutive months. November trade balance grew to $75 billion. In relative terms, exports to the US grew most (up 46 % y-o-y). The value of goods exported to the European Union in November rose by 9 % y-o-y.

Total exports grew most in China’s largest export category, machinery & electrical devices, which saw November exports climb by 25 % y-o-y. The value of exports was boosted particularly by computers and related components (up 34 %), mobile phones (up 29 %) and electronic circuits (up 26 %). Exports of high-tech products rose by a total of 21 %. Export growth in such categories as furniture (up by 42 %), toys (up 50 %) and sports equipment (up 67 %) suggested a revival in consumer demand despite the global covid pandemic.

Import growth remained at 5 % y-o-y in November. Growth in China’s imports was strongest for the US, which saw goods imports increase to $15 billion dollars, a 33 % y-o-y jump in November. The return of production to normal levels, which has happened quickly since early spring, is well reflected in China’s commodity imports. During the first eleven months of this year, the value of imports of iron ore and pulp were up by over 10 % y-o-y in dollar terms, while copper imports climbed by nearly 40 %. While oil imports were up by about 10 % y-o-y, coal imports were down by nearly 10 %. 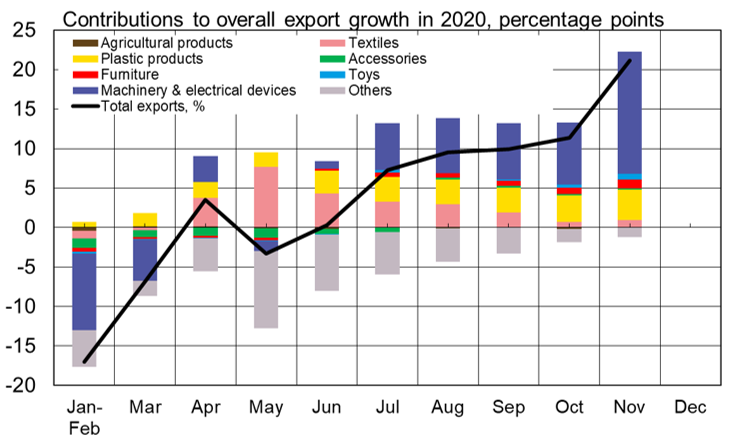