The recent increase in bond defaults has been seen as a sign that economic conditions are normalising. In other words, stimulus is being withdrawn and the monetary stance is tightening. During the first ten months of this year, 29 firms defaulted a total of 90 bonds. The value of the defaults was 94 billion yuan ($14 billion), a 10 % increase from the January-October period last year. Payment defaults increased further in November. They are still rare, however. Default rate is well under 1 % of outstanding bonds.

In recent years, the government has begun to tolerate bond defaults of state-owned enterprises (SOEs) and their number have increased this year. Financial media house Caixin reports that SOEs account for 40 % of bond defaults. At least ten SOEs this year have defaulted, including firms thought to be quite solvent such as microchip maker Tsinghua Unigroup, which is controlled by Tsinghua University, as well as Brilliance Auto, the parent company of BMW’s Chinese joint-venture partner.

Markets were stunned in November when Yongcheng Coal & Electricity, a wholly state-owned company in Henan, defaulted on repayment of its 1 billion yuan short-term loan, even though according to its financial statements should have had more than enough money to service its debts. The default provoked some investors to sell their SOE bonds and caused other SOEs to postpone new bond issues. Yongcheng later managed to negotiate an extension on its bond payments and thereby avoided defaults on further bonds coming due.

The government’s increased toleration for bond defaults and unwinding of implicit guarantees are generally seen as a welcome trend. It increases the role of market forces and improves the allocation of capital. Nevertheless, the pricing of risk is still challenging as Chinese credit ratings do not reflect the true financial condition of firms. Most bonds are given the highest or next-to-highest credit rating. In addition, firms’ ownership, financing and shareholding structures are often opaque. The most recent defaults sparked also market fears on suspicions that certain firms had deliberately transferred assets to other firms. Financial regulators announced in November that they would crack down on rule violations and fraud that threatened investor protection.

Bond interest rates on the interbank market have risen this month, but the increase in defaults seem not to have caused significant market disruption. Restructuring of debt is a common practice that usually results in the creditors recovering their belated payments. What is new, however, is that some provinces seem increasingly reluctant to support their SOEs. This trend could reduce investor trust in implicit government guarantees and increase the spread in interest rate among SOEs. 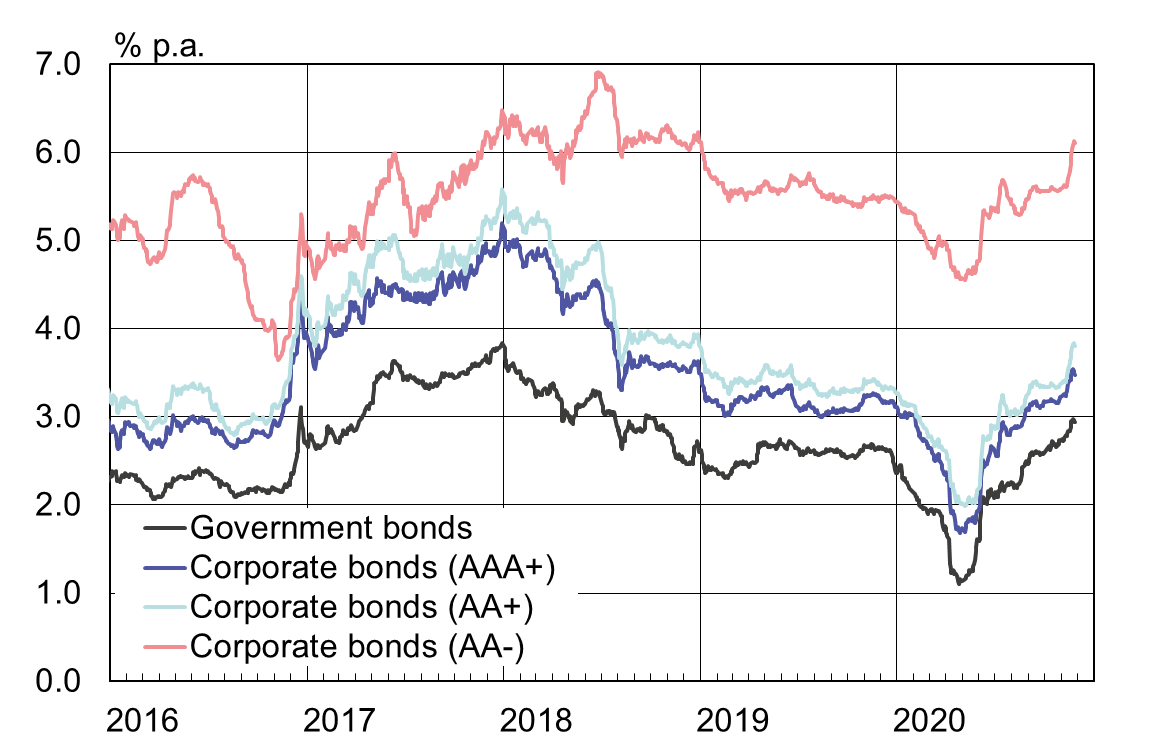