Taiwan to date has just 550 reported coronavirus cases, of which only seven have ended in death. On a per capita basis, the country has one of the lowest covid infection rates in the world. Taiwan’s readiness to deal with emerging epidemics was bolstered significantly in the wake of the 2003 SARS outbreak. Early in January, Taiwan moved swiftly with a range of measures that included mandatory quarantines for all persons entering the country, exploiting new technologies to identify infected individuals and a comprehensive system of testing and tracing. People’s readiness to use masks was high from the start, and many people at their own initiative avoided collective exposure at restaurants and bars. As a result, officials never had to mandate extensive business closures or severe restrictions on movement.

In both the first and second quarters of this year, Taiwan’s GDP contracted by only about 1 % y-o-y. Most of the contraction was due to consumers’ reluctance to spend caused by fears of contracting or spreading the virus. Retail sales fell by 15 % q-o-q in the first quarter or 3 % y-o-y. In the third quarter the economy rebounded with GDP growing 3.3 % y-o-y and growth is expected to continue in the fourth quarter. Taiwanese manufacturing returned to growth already in the second quarter of this year. Surveys indicate that business confidence has continued to strengthen. Retail sales grew in the third quarter by over 4 % y‑o‑y, the largest growth gain in many years. Taiwan’s goods exports rose by more than 6 % y-o-y in the third quarter. The improvement largely represents recovery from the lower second-quarter basis and a return to pre-corona growth rates. Because the Taiwanese economy is highly dependent on exports, the country has benefited from the early recovery of the mainland Chinese economy. China and Hong Kong together account for about 40 % of Taiwan’s exports. On the other hand, demand for Taiwanese exports has been hurt by the economic contractions in Europe and the United States.

The Taiwanese economy also appears to have weathered the economic fallout from the covid-19 pandemic better than other similar economies in the region. The IMF sees Taiwan’s GDP growth accelerating next year to over 3 %, and thereafter stabilising at around 2 %. Unemployment in coming years is forecasted to remain just under 4 % p.a. as at present. Taiwan’s public finances, which had been relatively balanced in recent years, are expected to show a deficit of nearly 5 % this year, with the government debt-to-GDP ratio rising to around 35 %. By international standards, however, Taiwanese government indebtedness is still relatively low.

Taiwan’s otherwise bright economic outlook has been clouded by increased foreign policy tensions, mainly with mainland China. In mid-October, the Trump administration greenlighted the sale of $1.8 billion in arms sales to Taiwan. Following the US decision, China imposed sanctions on the US arms sellers, but the measures are expected to have little significance.

Taiwan on track to become the best-performing “Asian tiger” this year; IMF forecast for 2020–2025 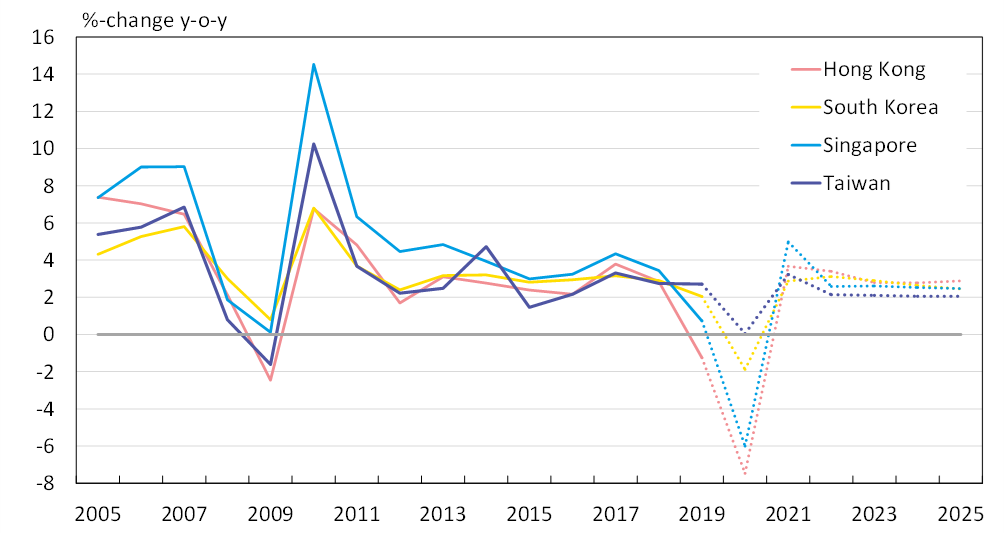