At the end of September, president Vladimir Putin stated that raw wood exports of softwoods (conifers) and valuable hardwoods (oak, beech and ash) should be banned. The ban is set to go into effect at the start of 2022, but details have yet to be released. The goal of the export ban is to reduce illegal logging and grey-market wood sales. Putin blames this illicit activity for Russia’s large loss of market share in the global wood trade. The ban also seeks to increase the value-added in Russia’s domestic forest industry production.

Russia has long strived for these goals by restricting raw wood exports. Raw wood exports were put under tariffs already in 2005 and the tariffs were hiked incrementally in 2007 and 2008. At that time, Russia already considered raising tariffs so high as to make exports unprofitable. When Russia became a member of the WTO in 2012, certain export tariffs on raw wood were lowered. However, quantitative quotas were imposed on softwood exports and the tariffs on exports outside the quota were not bind in the WTO agreement. Exports outside the quotas have experienced sharp increases in export tariffs in recent years. A partial or total ban on raw wood exports has also been discussed on several occasions in Russia in recent years.

In the peak years of 2005 to 2007, Russia exported about 50 million m3 of raw wood a year. In 2008–2009, exports fell by about half. Thereafter, exports settled at around 20 million m3 a year. In recent years, however, exports have begun to decline further. The value of raw wood exports in 2019 was $1.1 billion or 0.3 % of Russian goods exports. Of that, about 75 % was softwood and hardwoods set to fall under the ban. While raw wood exports have fallen, exports of sawn wood have grown. Most of these exports consist, however, of lumber that has only been marginally processed to avoid the export tariffs.

Russia is a major supplier of raw wood for both China and Finland, but its importance has declined. In 2005–2007, Russia still accounted for nearly 70 % of the volume of China’s raw wood imports. In recent years, that share has dropped to around 20 %. Russia today is China’s second-most important raw wood supplier. Russia is still by far Finland’s largest supplier of raw wood, with a roughly 70 % share. However, the significance of Russian imports to Finland’s forest industry has fallen over the past decade. In 2005–2006, it accounted for 20 % of the roundwood and fibrewood inputs for Finland’s forest industry. In recent years, that share has dropped to 7–8 %. As Finland mainly imports birch from Russia, the export ban should have a significantly smaller impact. 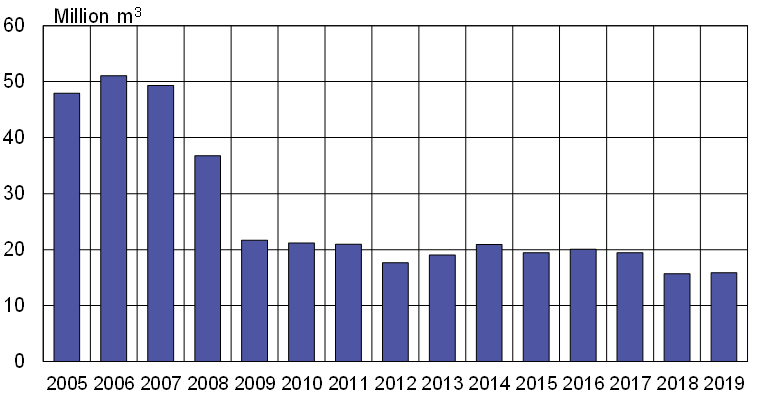