Although Russian GDP still grew by 1.6 % y-o-y in the first quarter of this year, it contracted by 8.0 % in the second quarter as the coronavirus epidemic and restrictions sharply depressed domestic demand. Private consumption fell by a whopping 22 % y-o-y and fixed investment was down by 12 %.

Russian GDP (seasonally adjusted) contracted by 3.2 % q-o-q in the second quarter. Notably, Russian GDP dropped by only 4.1 % during the first half of this year – a remarkably moderate hit relative to most economies. No European country experienced such a small drop in GDP in the first half of this year. Finland and Lithuania, among Europe’s least impacted economies from the covid pandemic, still saw GDP contractions of more than 5 % in the first half. The Russian economy has a favourable structure in this respect. Small services providers and tourism play a less significant role than in most countries. The current drop in Russian GDP was also smaller than during the 2009 crisis.

Russian GDP growth was largely supported in the second quarter by a collapse in imports, i.e. net exports increased. Seasonally-adjusted GDP, in contrast, has contracted continuously since the second quarter of 2019. In other words, the Russian economy had gone flaccid well before the coronavirus epidemic struck.

The purchasing manager index (PMI) reading for September suggests an uneven economic recovery. While the September PMI reading for manufacturing was 48.9, a decline into pessimistic sentiment from August, the PMI services reading was still above the 50-point threshold (i.e. positive), with a September reading of 53.7 (even though clearly below 58.2 in August). The low rise in prices of services in September at 2.5 % y-o-y also refers to weak demand. 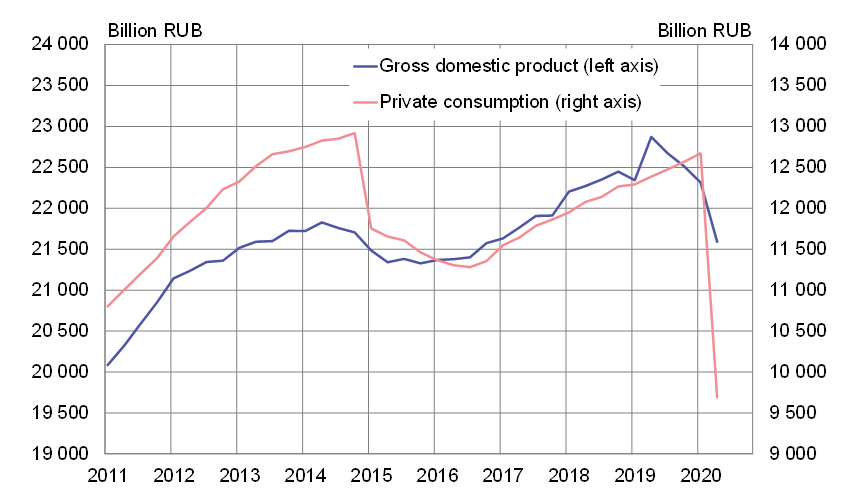